Suhith and a friend (hi Pramila) went to Marrakech a couple of weeks ago and I thought it was a good opportunity to look at the water supply situation in that city, especially given its position as a major international tourist destination. Its population is just over one million but that number is swelled by over two million tourists a year and tourism is a sector that is characterised worldwide by high water use.[1]  Marrakech is increasingly seen as a high end tourist destination and Suhith commentated that as the plane came into land and during the taxi journey to their hotel, she was struck by the number of golf courses and green spaces and yet the city is surrounded by desert. 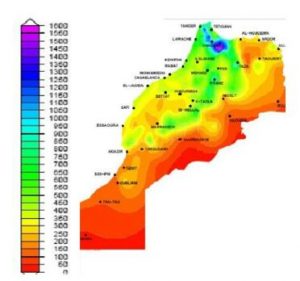 Eighty percent of Morocco’s territory is arid to semi-arid and the country is considered by the UN to be in water deficit. Due to a combination of strong population growth in the 20th century, economic development, a strong decline since 1980 in precipitation (-15% to -20%) and a commensurate decline in river runoff (- 30% to -40%), water resources availability is already under severe pressure. Water availability in Morocco has dropped from 3,500 m3 per person per year in 1960 to 730 m3 per person in 2005 and 645 m3 per person in 2015, well below the “water poverty level” of 1,000 m3 per person per year.

A history of water supplies to Marrakech 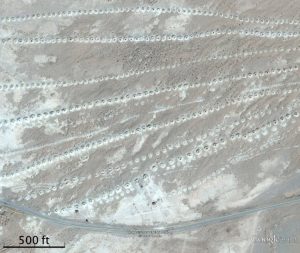 Marrakech is in the mid-southwestern region of Marrakech-Safi, located to the north of the foothills of the Atlas Mountains.  Average rainfall is just 238 mm a year.[2] The city was founded in about 1062 and for many centuries water came from the nearby Atlas Mountains fed by an underground network of khettaras. Khettaras are ancient underground water channels designed to transport water down slopes without active pumping. They consist of gently inclined horizontal tunnels dug into sloping terrain. When the horizontal tunnel hits the water table, gravity causes water to flow downhill in the channel toward outlets at the base of the slope. While the channels that convey the water lie below the surface, the access shafts used for construction and maintenance are visible above ground. 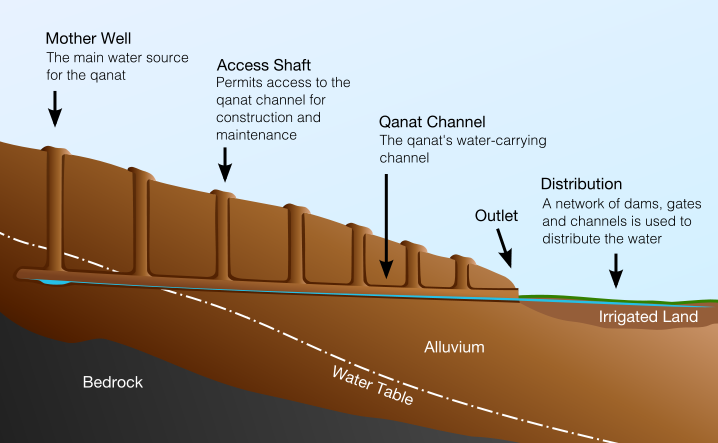 By the 1950’s the city was developing quickly and gaining an international reputation for tourism. As water demand started to outgrow traditional resources, utilities and farmers begin to tap into the local Tensift aquifer. By the 1970s, Marrakech relied almost exclusively on groundwater which came from two neighbouring aquifers, the Marrakech and Nfis. With the growing city and with increasingly large groundwater withdrawals for agriculture, the water tables began to deplete drastically.

By the 1990s the city had become a booming luxury holiday destination and was on the verge of a water crisis. Marrakech was considering transporting surface water from other basins, sometimes hundreds of kilometres away.  Meanwhile, around 20 golf resort projects were pending approval by the city authorities, the combined water use of which would be a third of Marrakech’s water consumption.

At the present day Marrakech consumes 66 million m3 of potable water, with an additional 6-12 million m3 (estimates vary widely!) to cover the irrigation of golf courses and public green spaces, of which there are 1,500 hectares.[3] None of the potable water demand is met by groundwater, but from surface water from the Hassan I dam on the Oum-er-Rbia (built in the early 1980s) and the Ouirgane dam on the Nfis River (completed in 2008). Leakage from the municipal supply is at 27% (down from a high of 40%) with a target of 20% in the longer term. Inter-basin transfers, notably from the North are again being considered as the baseline solutions to address Marrakech water security challenges.

Domestic water use is low (between just 80 and 120 litres per capita per day).[4] There is a larger scope for savings on non-residential water use, such as for hotels, and the green spaces and golf courses, but this is only 20% of total water consumption. The present water consumption of hotels in Marrakech has been assessed at 3.5 million m3 /year with an expectation that the number of beds will double by 2030 with a corresponding increase in water demand. There is supposedly an ongoing national programme promoting water conservation in the tourism and industry sectors, though there were no signs to save water in Suhith’s hotel room and the toilet was an old single flush WC.

But let’s go back to those golf courses and green spaces. Marrakech pioneered the reuse of treated wastewater in the 2000’s and now uses 7 million m3 of treated wastewater a year.  The city was supported in this initiative by the central government of Morocco, in exchange for strict non-revenue water improvement targets. The wastewater treatment plant (including tertiary treatment) and transmission systems became operational in 2012. The golf resorts signed bilateral conventions with the utility under the authority of the regional governor that indicated the estimated volumes of water needed. In order to deter the resorts from tapping into the aquifer as a more economic option, the conventions stipulated that resorts would be billed for at least 80% of the volume requested at the onset of the project, regardless of the actual consumption.[5] The capacity of the existing wastewater treatment plant (WWTP) is 33 million m3 a year, so there is plenty of spare capacity for other uses.

And to answer the burning question, did Suhith and Pramila have water-smart four minute showers while they were there? Of course they did!

This blog got a lot of its information from this report by the World Bank – Managing Urban Water Scarcity in Morocco. It provides excellent in depth reading about the water issues facing Marrakech and provides a wide range of potential, costed, solutions.

[4] These consumption levels are consistent with those of water scarce cities in other middle-income countries, including Egypt, Jordan, Tunisia and Turkey.