When posting my October no-blog I rashly promised one about fireworks for November:

Well, best laid plans of mice and (wo)men and all that… I found plenty on the internet about the constituents of fireworks and their harmful impact on the environment in terms of increased air pollution (which I already knew but try to ignore) but nothing on the water used in the manufacturing process, let alone any water footprint info…

I downloaded a lot of info, watched a lot of clips, (of fireworks obviously [1]), but also on how to make gunpowder. [2]  I watched a tour of a Chinese fireworks factory, which was, unexpectedly, remarkably low key – the factories consisting of many separate single storey huts so that the amount of gunpowder/explosive in any one building is restricted.

Later I found this cool picture from the 1920’s  of giant Catharine Wheels manufactured by Pain’s. And then noticed the same small buildings in the back! 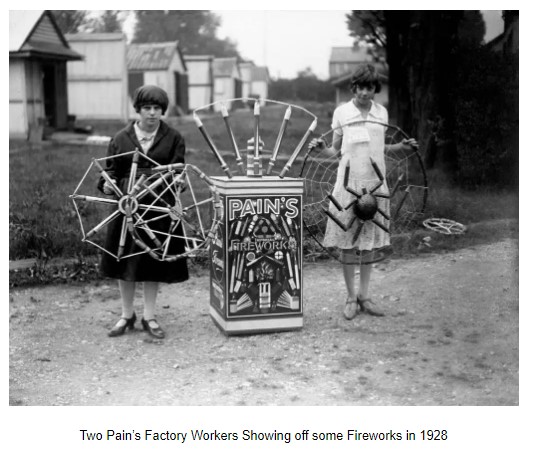 Later I found this cool picture from the 1920’s  of giant Catharine Wheels manufactured by Pain’s. And then noticed the same small buildings in the back!  https://www.fireworks.co.uk/classic-brands/ 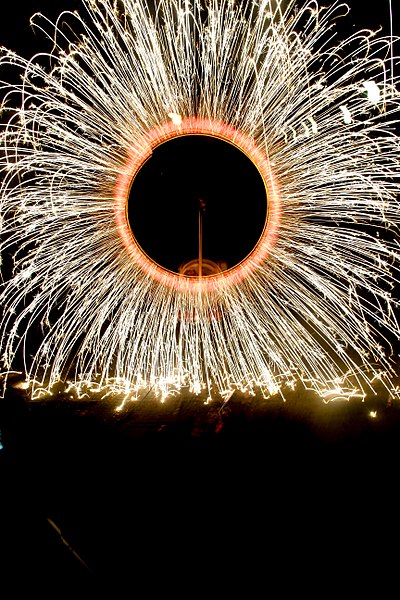 Undaunted, I abandoned that search and decided to tell you what I know about the Catharine Wheel. Named after St Catharine who was put to death on a spiked wheel, which is why the motto for St Catharine’s College in Cambridge is a spiked wheel and why my full name (though I never use it) is spelt with two a’s. Yes, it seems, that Mu and Eric called me Catharine cos Eric went to that college rather than after the firework that bears my name.

Anyway that’s what I thought but after I bit the bullet and changed my google search to the way everyone and their auntie spells St Catharine wheel i.e. with an e in I place of the second a, I found a somewhat gruesome ‘cartoon’ of the history of the Catherine wheel, and leant that Catherine of Alexandria, was martyred in the early 4th century at the hands of the emperor Maxentiusan. She was going to be put to death on a spiked wheel but it fell apart, she was beheaded instead and the legend was born. Also the Catherine wheel continued to be widely used in Europe throughout the middle ages, was finally outlawed in 1813 and was last used in Prussia in 1841.   [3]

So, in a nutshell, The Catherine wheel – medieval instrument of torture. As opposed to the Catharine wheel –the best firework ever!

Back in the day they were always somewhat disappointing as usually failed to work. Whizzed around twice and then got completely stuck and resulted in a static fizz on a tree. You always had to find a nail, which was either too big or too small. And a hammer. Or a handy bit of rock. Sometimes I could only find an oval headed nail, which added to the anticipation and exhilaration as it would spin off after a randomised time scattering the onlookers everywhere. The whole thing was so mind bogglingly complicated that most people never even tried to use the obligatory, in every box of fireworks, Catharine wheel. Even I went through a stage of thinking ‘oh what’s the point,’ and I would save it until the next year and the next year and the year after until I had nearly a whole box of forlorn unwanted fireworks – hold on a minute…  no wonder I need therapy!

And then, one year I bought a box of fireworks and the Catharine wheel had its own nail! Even better it had a plastic insert in the centre.  Catharine wheel nirvana had arrived and I, for one, have never looked back.

And so here, in all its glory, is video of a a Catharine Wheel of the modern era… with an introduction from Ols who knows a thing or two about watching me put on a fireworks display.

“The trepidation of watching Cath take >30 seconds to light every firework is what brings the excitement to any bonfire night!”

Cath and the Catharine wheel

Unfortunately not in youtube technology so you need to clunkily click on the link to see the vid!

[1] Nice Catharine wheel display but no tension in the lighting pahse https://www.youtube.com/watch?v=RhwUksYCno8

[2] A cartoon about the discovery of gunpowder. https://www.youtube.com/watch?v=mqHVRgCkCDE