I started this blog back in June 2016 before getting diverted into blogging about showering on a canal boat instead. So, trying again…  Warning: this is quite a long and technical blog but at least there is a joke at the end.

To be honest, I’m surprised it’s taken me this long to get round to blogging about showering in the office given the fact I cycle to work  most days of the week and for most of my cycling career (Um Cath you’re not Laura Trott or Mark Cavendish, you know. You wouldn’t survive for ten seconds in a pro-peloton. Dream shattering Ed.) I could have showered when arriving at my destination. Of course we could put it down to my super water efficiencyness that I don’t think a second shower so soon after a first is a good idea. Or we could it put it down to the whole faff of undressing and re-dressing plus the need to have towel, shampoo, soap etc. etc. available at the office. And then what to do with the subsequent damp towel. At least damp Lycra dries out nice and quickly.

Plus somehow getting undressed at the office just doesn’t seem quite right – unless you work from home I guess. But what is an interesting question (to me anyhow) is if I had a shower in the office instead of at home is that better or worse for the overall environment? Or, to put it another way, is it more carbon efficient to heat water using an air source heat pump as that is how the water is heated at the ech2o offices, or with a gas condensing boiler, which is how we heat water at home.

To make things simpler I am going to assume the same flow rate, same temperature and same time in the shower both at home and in the office.  A very unscientific turning on the office shower and a glance at the stream of water shows I am in the right ballpark. And the shower is thermostatically controlled so I can do my whole ‘turn on – get wet – turn off to soap up’ method (which is important as regards time in the shower). I am also going to assume I am in the shower hot on the heels of a previous user. At home, I am usually the first and it takes about 4.5 litres of water before shower is warm enough for me to get under; at work I have no idea. (Somewhat disappointed by lack of rigorous research in this paragraph. Scientific standards Ed.)

My usual shower has a flow rate of 7.5 litres/minute and I am under it for an average of three minutes, so 22.5 litres of water. Temperature is about 42 degrees C which is pretty hot for a shower but is to ensure I have enough heat in me while doing the water off – soaping up bit.

An air source heat pump extracts heat from the outside air in the same way that a fridge extracts heat from its inside. This is how heat pumps are always explained. As though we have all learnt the innermost workings of a fridge from the time we could walk… Though this link explains it really simply and I am sending it to Lisa Mufaro as I write as she is two and should really know this stuff already.

I am now going to explain the inner workings of the heat pump but you can jump this bit if you want. 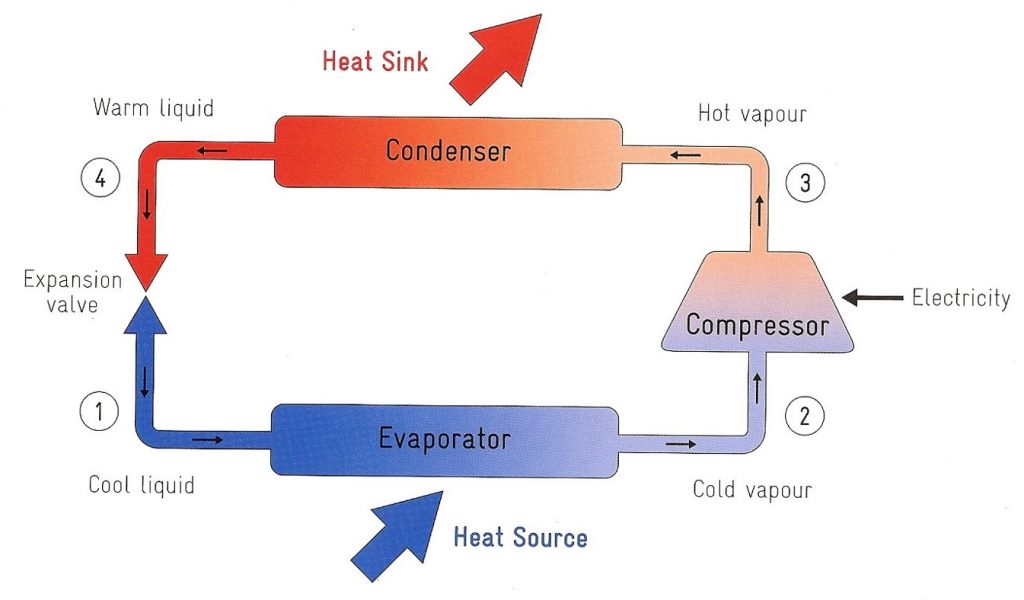 The refrigerant, in its gaseous state picks up heat from the outside air (heat source). It is pressurised and circulated through the system by a compressor which needs electricity to work. On the discharge side of the compressor, the now hot and highly pressurised vapour (3) is cooled in a heat exchanger, (called a condenser), until it condenses into a high pressure, moderate temperature liquid (4). It is cooled by giving up its heat into a hot water cylinder or thermal store (heat sink). This is the water that will be used for my shower. The condensed refrigerant then passes through a pressure-lowering device (expansion valve). The low-pressure liquid and cool refrigerant (1) then enters another heat exchanger, (the evaporator) where the fluid absorbs heat from the outside air (heat source) and boils to become a cold vapour (2). The refrigerant then returns to the compressor and the cycle is repeated.

The upshot of all this is that we get more heat energy out (measured in kWh) than electrical energy in during this process. We measure it using something called the Coefficient of Performance (COP). The higher the COP the more kWh of heat out compared to the kWh of electricity in.

But the question I asked was whether it was more carbon efficient to shower at home or at the office and to answer that question I need to show you two graphs. (The first comes from here and is an excellent overview of everything to do with heat pumps, written by John Cantor.) 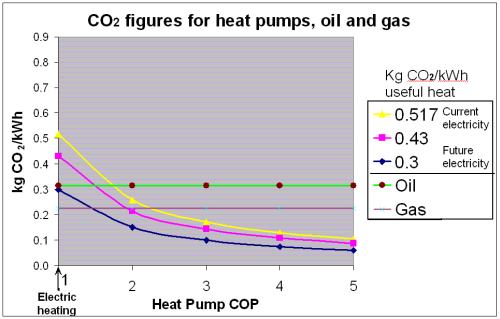 The graph shows CO2 emissions from gas and electricity. The graph shows that 0.21 kg of CO2 are produced for every kWh of heat from my gas condensing boiler (the pinkish/purplish straight line). It also shows the carbon efficiency of a heat pump at different COPs when the content of electricity in the UK is 0.517 kg of CO2 (the yellow curved line). You can see that for my shower to be more carbon efficient at the office as opposed to at home then the heat pump needs to be working at a COP of greater than 2.2.

So now we need to know when (or if) the heat pump at the office is performing at a COP of greater than 2.2. 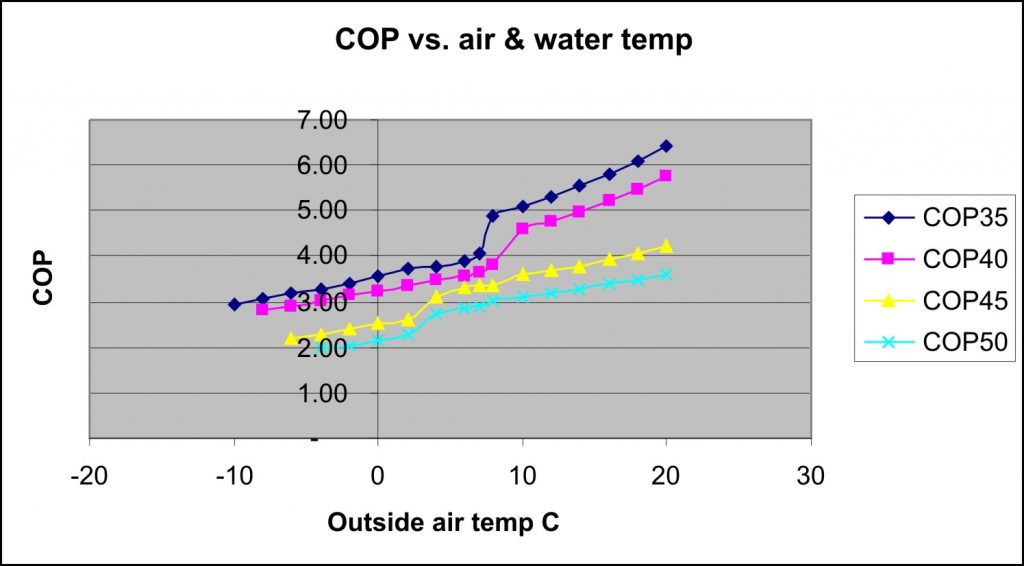 The second graph comes from here which is another good link for explaining heat pumps. It shows various COPs against external air temperature. You can see that the COP is greater the lower the required water temperature, and that it’s greater the higher the outside air temperature. We need to look at the COP for 50 degrees as that is the lowest temperature to which we would heat hot water. You can see from the graph that any outside temperature higher than 4 degrees C would mean it would be more carbon efficient to be using the heat pump. Aaaaggghhh. It’s virtually never colder than 4 degrees C in central London by the time I’ve reached the office!!

What happened there? I started this blog secure in the knowledge I would prove that it was better to shower at home and now look what’s happened. The beauty of maths. It doesn’t lie. Just leads you to uncomfortable truths…It looks like as though a true eco warrior would shower at the ech2o offices. Luckily I live with a psychotherapist and have learnt it’s OK not to be perfect…