Crazily this is my one hundredth shower blog! So what better time to have a blog with only a very spurious link to showers? Rhetorical question actually as my mind is already made up and really this blog should be called NOT showering at sea… But at least let me, without more ado, drop in a picture of a rather fab shower on a cruise ship, which, in a vain attempt to stay true to the title of this blog, shows how the rich and famous might do it. 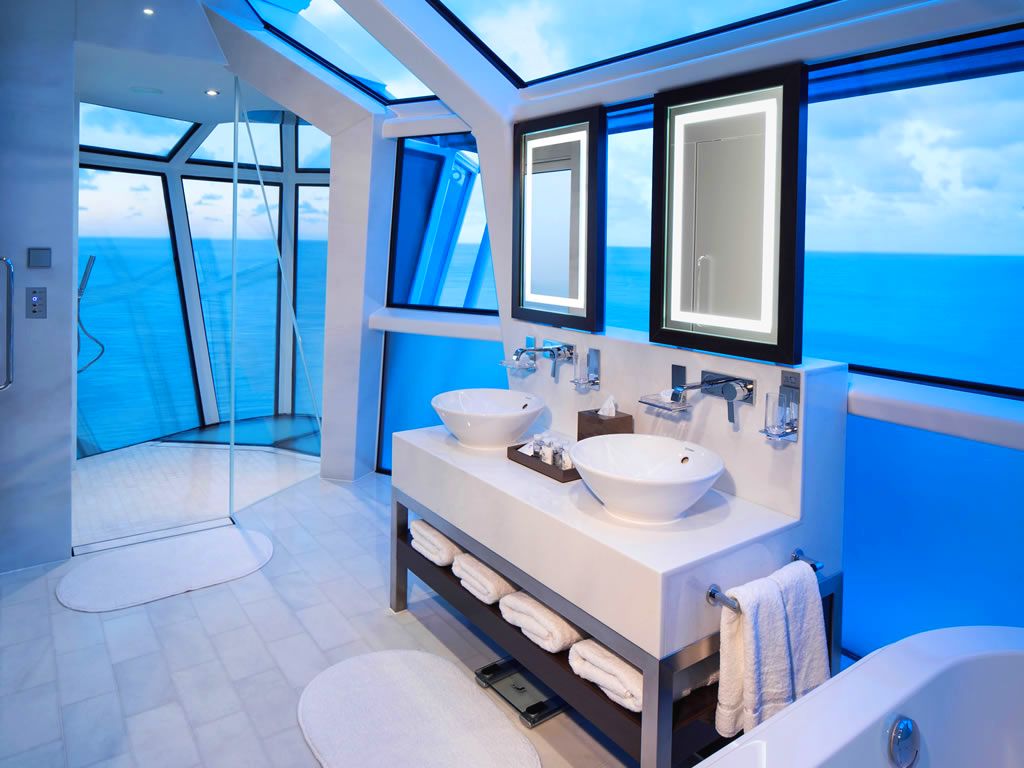 I have crossed the channel on a ferry many a time and have also gone to New Zealand and back by ship (more of which later), but I don’t have any tales (or even recollections) of showering while at sea. The ferry trips are usually the shortest possible route to avoid sea sickness so no cabins necessary. The exceptions – Hook of Holland to Harwich after spending New Year in Amsterdam dodging the firecrackers and Spain and back for a road trip – all included cabins but the sea was too rough to have a shower. Re the ship to New Zealand. Obviously I must have kept clean somehow on a four and a half week voyage but since I was in cheapo class, eight of us in one cabin and not enough room to swing a cat when we were all trying to get dressed at the same time, there is no way there would have been a bath to luxuriate in.  So I would have showered, just can’t remember doing so.

Traversing the Bay of Biscay

A few years ago Suhith and I decided on a road trip in Spain and decided to take the ferry directly there. This would entail traversing the notoriously stormy Bay of Biscay. Just not notoriously stormy enough that we thought about it before we went. A schoolgirl error it has to be said. The bay is known for its rough seas and violent storms due to a) its exposure to the Atlantic Ocean and b) the effect of the relatively shallow water (250m deep) above the continental shelf. Its leading edge plunges down to over 2000m and is dissected by numerous submarine sheer cliffs and canyons. This has the effect of rapidly steepening the Atlantic swell. Because it is so abrupt and irregular, the surface of the sea in the bay becomes confused and extremely rough even in a moderate storm. 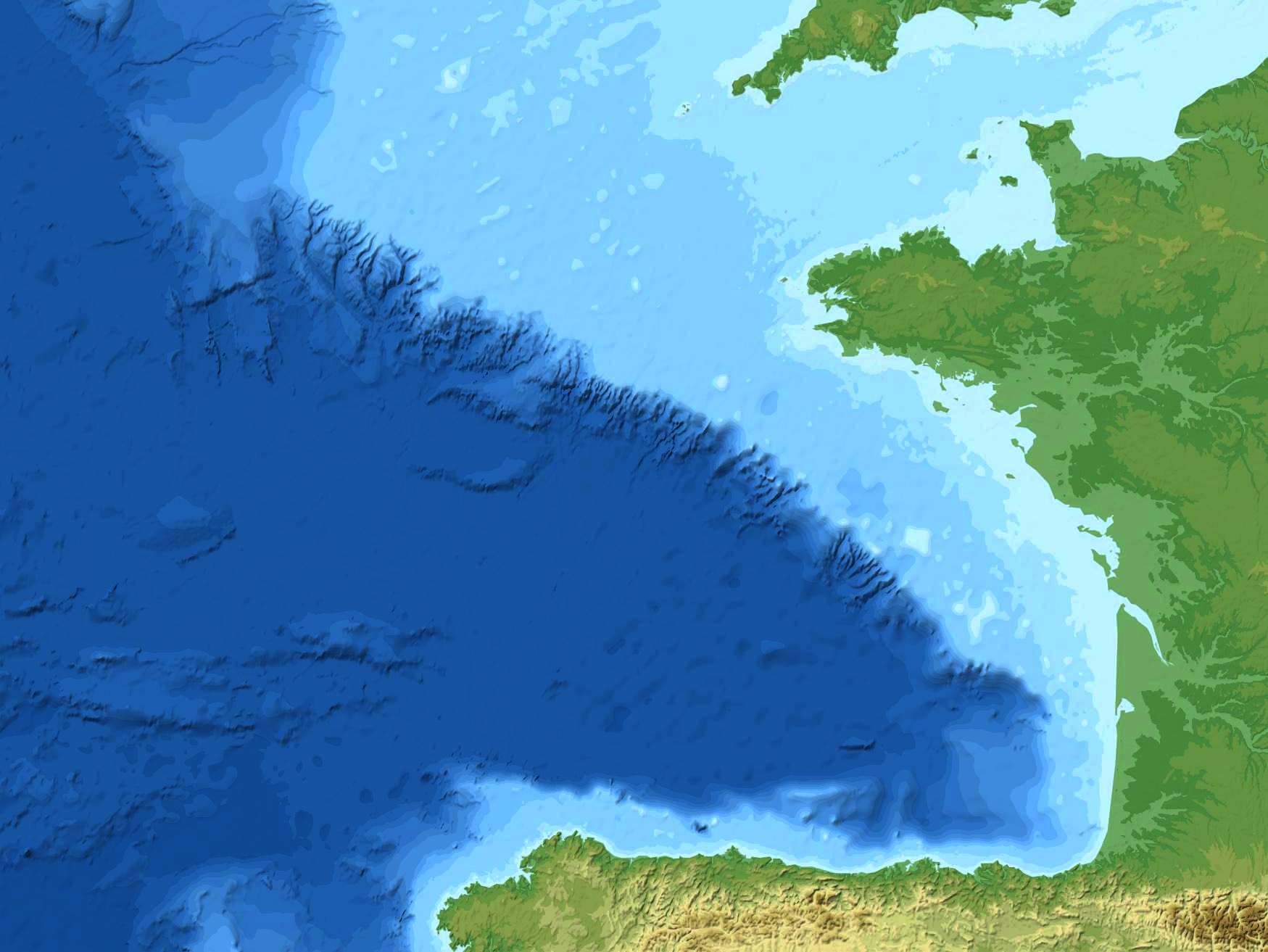 The dry land part was brilliant as covered in showering with the Neanderthals , the highlight of which was the fact that the Neanderthals may well have discovered the importance of short showers if their cave art is anything to go by.

The sea voyage not so much. Especially the return leg. Suffice to say I now know that you have only ever really suffered from sea sickness if you have lain on the floor in a cabin ‘bathroom’ (legs out of the door cos there is no room to fit the whole body in when in a prone position), with your head in the shower tray because you are too ill to lift your head up far enough to hang it over the side of the loo, and all you can hear over the sound of your heaving is the trap sloshing back and forth with the rolling motion of the ship.

Weirdly, when I got back from the Santander voyage I found clips of passenger ferries in storms rather reassuring, especially this one, which made me laugh like a drain.

A hurricane at sea

Back to the New Zealand trip. When I was 17 I came home from school one day and told Mu I was going round the world when I was 18. She remarked that I certainly wasn’t! But that I could go and stay with Norrie (my erstwhile godfather) in New Zealand. This subsequently became a family joke so it is what I did. I went by ship because there was no such thing as budget air travel back then and it was actually cheaper to take this option than fly, if you chose the cheapest cabin option.  You also got to stop off at a few ports along the way. Most people did overland routes but Mu had already put a stop to that. Whilst the cabins were strictly class rated everyone ate the same amazing food. It was the 70’s and I had only ever been to an actual restaurant once by then, so to me it was like being in a movie, with the starched linen table clothes, a myriad of different cutlery and several courses at breakfast, lunch and evening meal, plus a buffet tea and buffet supper.

Everything was fine until we were due to leave Cape Town on our way to Australia across the Indian Ocean. Before we left harbour we heard rumours of a hurricane and that the captain had been advised to stay in port for 24 hours. Now, winds in hurricanes are 75mph and waves can reach 100 feet, but did that bother our captain? It would seem not. He had a schedule to keep to and so he decided against such a move, albeit with the proviso we would sail south first so as to ‘miss the worst of it’.

At first it was all good fun. Especially trying to eat as chairs and food slid across the floor and table respectively.  But then it got too rough to serve any more food and we were advised to stay in our cabins for safety. Which if you had a half decent cabin might have been OK I guess. Walking anywhere on the ship was super hazardous. Going up and down stairs you could only go when the ship was rolling in the right direction. Ropes were slung across foyers so you had something to hold onto as you crossed. But, unless you dashed across when the ship was upright the roll was so steep it was virtually impossible to keep hold of the rope at its maximum tilt. One woman didn’t make it; she couldn’t hold onto the rope, slid across the floor, hit the lift doors which gave way, plunged down the lift shaft and was killed.

I had read about waves as high as houses, but nothing properly prepares you for seeing the real thing. After being told to stay in our cabins I sat on a fixed chair in one of the lounges as the ship battled with the elements. You would see the sky and the massive waves and then the ship would start to roll into the waves until all you could see was the sea. The boat would go lower and lower into the waves and just when it seemed that if it went any lower it would tip over completely it began its slow leisurely roll back the other way. You saw the massive waves and the sky and then, as it continued its roll, all you could see was the sky. You leaned further and further back until the roll finally stopped and it was rinse, repeat. Eventually that palled so I gave up and went to bed. Where I spent the next 24 hours sliding slowly up and down the bed, unable to do anything about it. Most disconcerting. And the sea sickness you ask?? Not a jot!

This is as close a video as I could find on YouTube showing what the view of the waves was like. Only we were rolling rather than pitching, the movement was much slower, and it went on and on and on and on.

I’m pretty sure our ship didn’t have stabilisers fitted. This is an interesting video of how they work and which design is best.