Just before you, the loyal readers, get all impressed by the fact that not only do I have time to write the best showering blog on the internet, the award winning all-things-watery ech2o newsletter and invented Frankie the flamingo and her sidekick Clarence (the crab who doesn’t like pooh on his head) that I also find time design ways to get the great British Public out of the shower quicker I have to ‘fess up… Actually these aren’t my ideas at all! I am merely stealing the designs of the youth. But what youth! And what designs!  And since there are so many of them this one could run and run.  So, in no particular order, let the countdown begin!!

Alert readers may have spotted this particular shower design already and they would be right as I have both tweeted it and put it into the newsletter, cos I think its so brill. Shower longer than four minutes and you are destroying the polar bear’s sea ice, so the cage door opens and out comes a polar bear to eat you up! How serendipitous – if a little messy. But wait!! 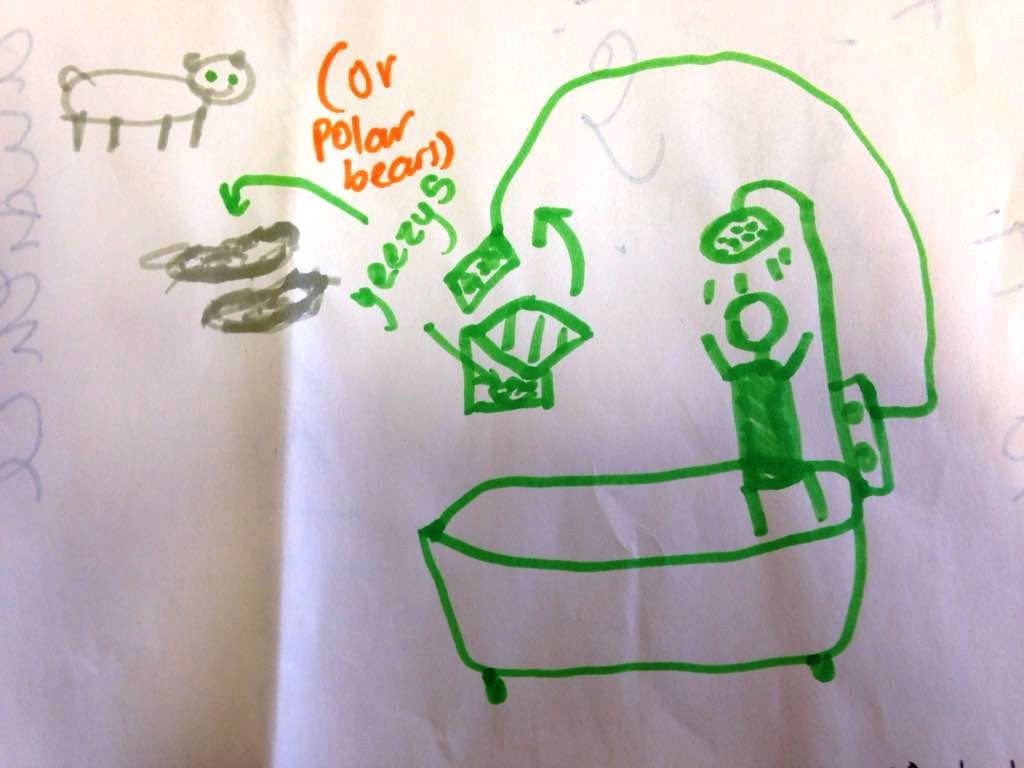 You see those two turd like looking things underneath the unbearably cute polar bear? With a few arrows and the word yeezys?  Well, I just assumed one of the group was called Yeezy and it was his idea to draw a sneaky couple of bits of pooh and see if he could sneak it past the teacher in an ‘aren’t I just the smartest 15 year old out there?’ kind of way. And that really it was the polar bear who was the star of the show. But no… I have been reliably informed by the nearest thing to youth that reads my ramblings – hi Ols! – as follows: ‘Did it pass you by that, as an alternative to polar bears, the pupil had also suggested ‘Yeezys’, which are shoes designed by Kanye West and cost a gazillion pounds?’ Well yes it did! Right past me!

Ols suggested that the showering youth would be so excited to wear his Yeezys that he would spend only moments in the shower before having to rush back to them to clean them. But looking closer at the picture it’s clear that the afore mentioned showering youth is actually going to win a pair of Yeezys if he gets out of the shower before four minutes are up. Or a polar bear… Which I now wonder is just a cute fluffy one… Though I far prefer my original interpretation of this design.

And that gazillion pounds thing? Well obvs I thought that was just a bit of youthful over exaggeration so I checked them out on-line. £220 for a pair of new Yeezys! (A bargain if ever there was one since they were a limited line and are now all sold out.) Still available though at the bargain price of £490 for a pair of used women’s cloth Yeezys! Or £1,100 for a Yeezys men’s Boost! (Though these ones might be unused) Anyway, what passes for a youthful sneaker lecture is now over, so back to the shower designs.

Very unusually, one lad rather liked the four minute shower timer, and the fact it was so cheap that everyone could have one, but didn’t think its impact was powerful enough… So, he took it, jazzed it up a bit, and what have we got now? Yep! A Polar Bear Death Timer!! Thames Water will, no doubt, be thrilled to see their logo all over it – NOT. LOL!! But at the same time Bilal has made sure we know it was him who designed it first, and it looks like he’s given himself a bit of a patent number too! 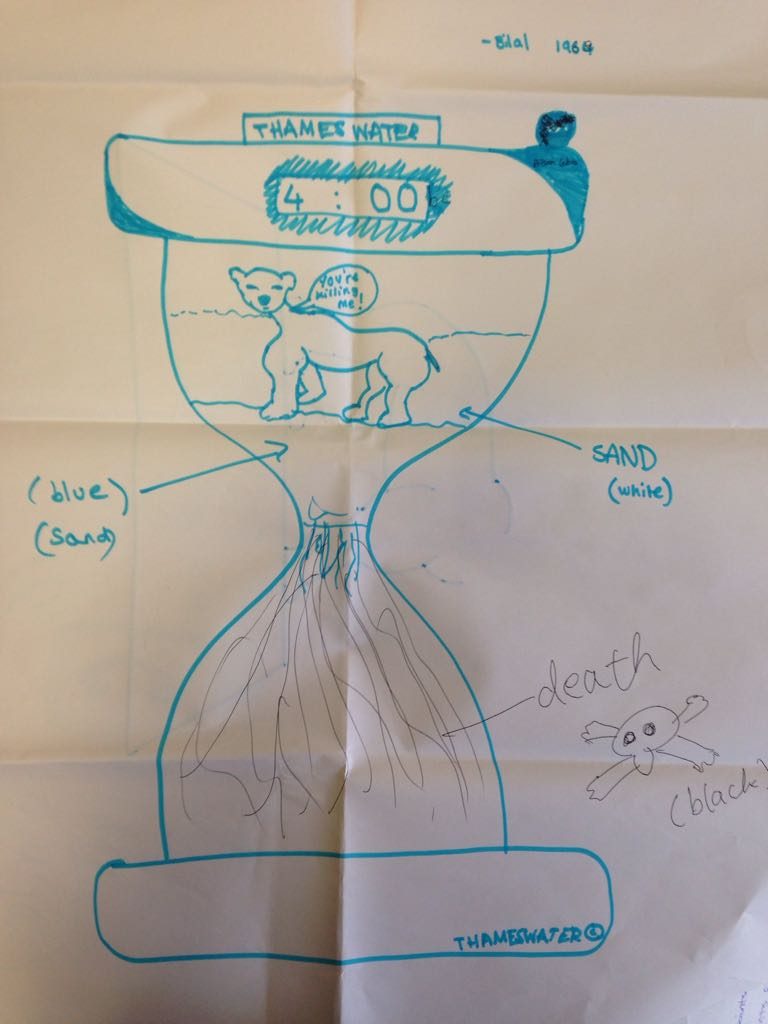 This class only had a minute to explain their designs and to be fair most of them decided that was far too long and that 20 seconds was more than enough time, but I’m pretty sure this isn’t a real polar bear inside his shower timer, and he didn’t explain quite how the was going to get the sand to change to black. But you have to admit that it definitely has a bit of je ne sais pas about it! 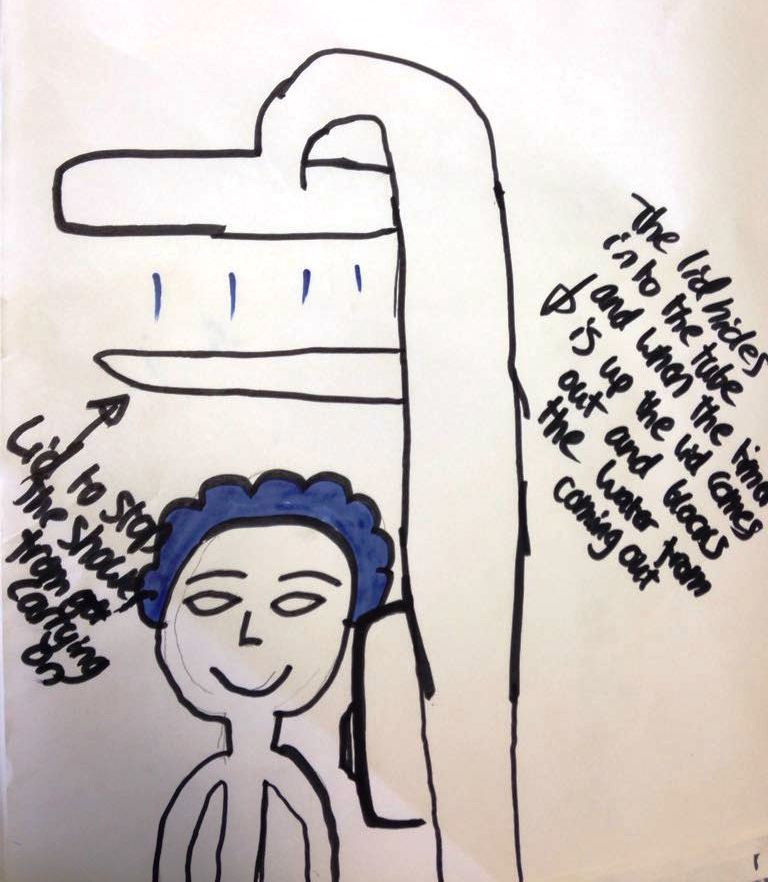 This group started off with the idea that the holes in the shower begin to close over as you approach four minutes under the shower. I said I thought that was a brilliant idea and would probably be eminently possible. It could probably be powered by the flow of water itself in a retrofitted shower head. Even if they just partially closed up, or just some of them closed up completely to the ones at the edge, surely that would work? At which point they got a bit suspicious that I might be coming to their school to steal their ideas, and then make billions by mass production in China and subsequent flooding of the world market… That wasn’t my idea at all, but then nor was mining their designs for material for this blog! So I guess they were right to be wary… Anyway, they then moved away from the holes closing up idea and came up with the design on the left. I can see this being quite stylish. Fixed head shower, stainless steel barrier slides out and then up to completely cover the shower head. Starts coming out as you hit three minutes as a bit of a hurry up. So, just to be clear, this idea belongs to Olivia, Aafrin, Rana and Abidato. Year 8 resistant materials class Kelmscott School, 24th May 2017. Needs a whole new shower and is pretty high-end, but fair enough if that’s the market they are aiming at.