Way, way back, in April 2014, I got a bona fide shower invitation to test out a recycling shower. I subsequently blogged about it under showering for as long as I want . It’s taken a long time to get round to ‘showering for as long as I want Part 2’. The CINTEP recycling shower was an Australian invention which cleaned and re-heated the shower water whilst it was being used. It delivered a set flow rate of 9 litres/minute which was made up of 2.7 litres from the cold supply and 6.3 litres of recycled shower water.

It was an Australian invention, and never made it to the UK market. In 2017 a Guardian article suggested that a launch in the UK was imminent with a guide price of £3,500 per unit. At that price it was always going to be a hard sell. And re-using wastewater for bathing (especially in the UK with its regulatory requirements for bathing water), is fraught with difficulty, requiring sophisticated (and therefore costly and maintenance intensive) cleaning systems.

If wastewater is used immediately for non-bathing purposes then just a small amount of coarse filtration is required.  We have been using shower water successfully on our garden for the last 15 years, beginning with a home-made filtration device which failed a lot followed by a brilliant bit of kit courtesy of Watermatic which I blogged about back in 2013. 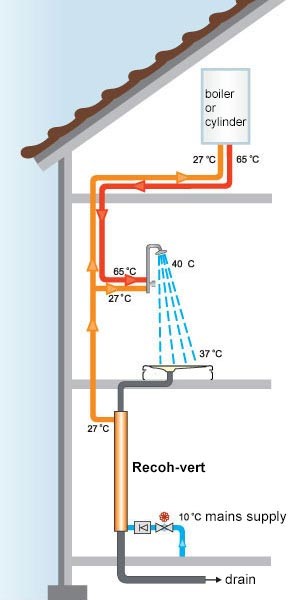 The heat that is in shower water is, in a lot of ways, more useful than the water itself, and has a higher overall positive environmental effect; certainly in the UK.  And, in a fortuitous synergy, it is far easier to get the heat out of shower water for re-use – a process called Wastewater Heat Recovery (WWHR) – than it is to clean that same water to the standards required for direct re-use.

Wastewater heat recovery – how it works

A WWHR system uses a heat exchanger to remove heat from the outgoing water and transfer it to the incoming cold water and has no moving parts. In a vertical WWHR system the heat exchanger is a twin walled pipe. The waste water exits through the inner core of the pipe and the incoming mains water enters in the outer core of the pipe. The Recoh-vert WWHR system – other makes are available – has a great little diagram showing how it works. Water comes out of the shower head at 40OC. By the time it has washed over a body and fallen to the tray below the temperature has dropped to 37OC. This water would normally run to waste taking that heat with it. Install a bit of WWHR kit and, under optimum conditions, the incoming cold water is heated from 10OC to 27OC, a 17OC rise.  This means that the cold water going into the shower, the combi boiler or filling the hot water cylinder is actually now warm water. With warm cold water at the shower head less hot water is required to raise the temperature to the required 40OC. If feeding the hot water cylinder, less energy is required to heat the water up to the design temperature of 65OC as the incoming water temperature is higher. In a combi-boiler the water comes out hotter if the incoming temperature is greater as combi boilers heat up the water at a set temperature rise regardless of incoming temperature. 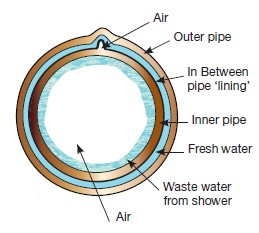 As seen in this cut-through of a WWHR twin-walled pipe, as water runs to drain down a vertical pipe it adheres to the side of the pipe. The incoming mains water is heated up by the process of conduction, which is when heat passes from a warmer to a cooler substance. The inner pipe is copper as that has a high conduction rate. The outer pipe can be plastic as plastic has a low conduction rate; or is also copper but is insulated to prevent heat loss to the air. Tests in the Netherlands on the Recoh-vert RV-3 have shown that 62% of waste heat is recovered at a flow rate of 7.5 litres/minute.

Most vertical WWHR systems require between 2 and 2.5m vertical space under the shower tray which means retrofit can be tricky. Even for new build thought has to be given how to accommodate a vertical WWHR system and in flats or downstairs shower rooms that space is not available. Therefore there are horizontal solutions now available, though they are not as efficient as vertical WWHR units. 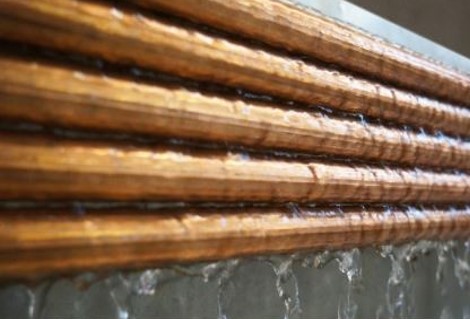 Most WWHR systems cost less than £500 to buy. Someone asked me once how quickly payback would be. The difficulty with such a question is that it depends on several different parameters, including flow rate of the shower, duration and frequency of the showers undertaken and the number of people in the household. But it gives me the chance to do a bit of a spreadsheet calculations and, as regular readers of this blog know, I do love a spreadsheet!

So let’s take a household of four who shower every day for 7.5 minutes (the UK average shower time according to the EST) and have the optimum flow rate of 7.5 litres. Luckily a standard flow regulating shower head regulates flow to 7.6 litres/minute which is close enough for the purposes of this blog. The amount of water used stays the same so the savings are from heating the water.

In some calcs I did earlier where I heated the shower to 38OC (as opposed to 40OC) I worked out that if you were a household of four you would need (assuming a boiler efficiency of 90%)  2,981 kWh of gas per year. At a cost of 4p per kWh of gas, the annual cost is £119. If you achieved the maximum 62% saving then the energy required would be 1,133 kWh which would cost £45. 1,848 kWh less gas would be used, resulting in a cost saving of £74 a year. The best performing horizontal WWHR system recovers 50% of waste heat and would save 1,490 kWh of gas and £60 a year. As energy costs rise (obviously very much on the horizon as I write) then so do the monetary savings.

Retrofitting in our house would require a horizontal version. And will need to wait until we update our bathroom and turn it into a wetroom. So watch this space.

And, just to be clear, neither a recycling shower nor one fitted with WWHR actually means I can shower as long as I want! #justsaying