Having only moved to Australia, a year and a half ago, I feel somewhat over-whelmed and under-qualified to be sharing my views on Australia’s ‘water issues’. So where do I begin? Well, I decided that it would be easy to write about a country where flooding and drought can happen in the same day, or to recall the latest facts about yet another nation that is facing major challenges due to climate change, climate variability and reduced water availability1. But, I decided, you can look that up for yourselves!       Instead, I asked several people to tell me their own ‘Australian Water Story’, and the first edition of these is what I have imparted here.

The Big Dry and the Water Police

In the world’s driest inhabited continent, water quality and availability is under enormous pressure2. My country is a drought-prone country, mostly because of its geography and changeable rainfall patterns. I want to tell you about a decade-long drought, we like to call ‘The Big Dry’. It finally ended last year.

A lot of people thought that The Big Dry was quite fun at first – it was something to joke about over the barbie, or an excuse to shower with someone you liked. Over time, the mood changed. Water restrictions were getting heavier. Our gardens started to fail, our agricultural production was declining, and, when water storage fell very low, even our energy supplies were threatened.

If you think about it, more so than perhaps any other resource, water is a cause for a crisis wherever you are in the world. It changes where people live, what they eat, or what they do in their spare time. Not having a reliable water supply also costs us a lot of money – during The Big Dry the subsidies paid to our farmers alone has amounted to $4.5 billion Australian dollars – to you, that’s $4.7 billion US dollars or $2.9 billion Great British Pounds Sterling.

So what did the people do?

Even the alcoholics who didn’t drink water were affected. During the drought there were all kinds of local rules where people could only water their lawns on odd days of the week (if their house number was odd) – and vice versa. There were self-appointed ‘water police’ that patrolled the streets, and ‘water vigilantes’ who dobbed in the people that were found to be watering their lawns at night. Believe me; some people went to great lengths to protect their lawns and gardens. Many people even continued fuelling their addiction to watering their concrete driveways, despite the possibility of being caught.

A few years into The Big Dry, there was a horrible case of what you might call ‘water rage’. One day a guy down my street – he was a retired lorry driver – was hosing his front lawn when a stranger walked past and challenged him about wasting water. The two men began arguing and my neighbour (perhaps as a bit of a joke?) turned the hose on the passing man, soaking him. A nasty fight broke out and my neighbour ended up dying in hospital. That’s a horrible and true story3. I’m ashamed to say that I didn’t know my neighbour very well, but he seemed a very likeable sort of fellow. This incident will probably always stay with me. It’s like a microcosm of what could – or already is – happening on a global scale.

It’s a strange phenomenon. The water us urban Australians get appears to be so plentiful that we literally excrete in it. And no, we are not all like Crocodile Dundee. Towns and cities are home to 80% of the whole Australian population. However, even when there is an abundance of water (such as during the well-publicised floods in Queensland in 2011), areas were still officially in ‘drought’ status. 90% of the land was underwater. There was loads of water at that time of year, but little to drink. The rest of the time we were flushing it down the toilet.

For those not connected to the ‘urban water grid’, you will find plenty of rainwater tanks and very different values applied to this precious resource. In the long, hot summers when the citrus trees needed watering but people could not afford to use drinking water, buckets of bathwater would be carried out to the trees. We used to love sitting inside 40 gallon drums in the back of Dad’s ute (utility truck) from my Grandparents place back to ours (my Grandma and Grandad were connected to mains water). I loved jumping into the water-filled drum and riding home in the coolness of the water as it sloshed around with the movement of the ute. It is one of my simple, happy memories from childhood. 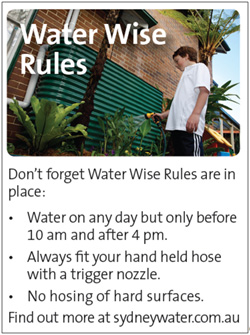 We’re now into a wet cycle again, but it seems that people haven’t all gone back to hosing down the driveway, or taking showers alone for that matter! So many people have rainwater tanks these days. Some have even installed greywater and wastewater systems. I have mixed feelings when I tell you that the dams are overflowing because we’ve changed our habits. I guess that going back to the way we did things before just doesn’t make any sense. I will say though, that we shouldn’t do too much self-back-patting. When you compare our water use with the rest of the world, it is still pretty embarrassing. We are not all that ‘water-wise’. 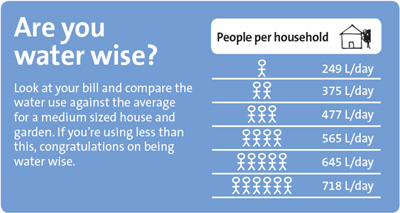 Years before I was born, the sewers were laid under our streets. I guess I’ve never thought about what happens down there. But a friend of mine – my very smart friend – was telling me about a study they had been doing at University, which has really made me think. She said that saving water was making our sewers smellier and shortening the life of the pipes in the ground. She said that our level of water use has gone down, but our level of waste going into the sewer has not. In other words, by reducing drinking water and replacing it with rainwater, treated greywater and/or wastewater, we are simply creating more concentrated wastewater. It’s this concentrated wastewater that leads to a higher percentage of odour-producing gases and a greater rate of pipe corrosion.

I read it and sigh. It’s just another one of those things that my ‘un-environmental’ peers love to bring up with a certain kind of glee as if ‘the whole sustainability thing’ is just a waste of time. They don’t understand, or maybe they choose not to, when I explain that if those sewer designers had thought about sustainability in the first place perhaps their designs would have been a bit smarter.