‘That’s the shower blog for you. Always just behind the eight ball.’ As Mu wouldn’t have said cos she wasn’t a big sports fan. (Though she did know that Georgie Best ‘played for England’ – LOL). She was also a big fan of ‘it doesn’t matter whether you win or lose, it’s how you play the game.’ Which never went down well when I was 15 and losing at hockey. Or any time Leicester City lost. Especially the time we lost 1-0 at home to ‘boring boring Arsenal’ after we hit the post three times and the crossbar once and each shot came back out and they hit the post once and it went in… (Not that I’m bitter or anything)

And where do I stand now, decades later on that point of view? Think I would say, it’s important to play hard and fair and winning isn’t everything. Until you lose.

Anyhow, the shower blog… Had a shower in Bury Water last week. Oh up north were you Cath?? That would be a fair assumption but actually no! Suhith and I were in Exmoor camping (camper van mind you) with showers few and far between at the campsite (due to – you guessed it – Covid restrictions). It was fabulously hot and sunny and a shower was definitely required. So we nipped round to see Karen (a mate of Suhith’s) who lives there in a tiny hamlet (ten houses, tops) below Wimbleball lake.

For you fact file fans: Wimbleball reservoir on Exmoor is a concrete buttress construction (Concrete buttress? Excellent!) which was completed in 1979. The dam impounds water from the River Haddeo to form a reservoir with a net storage of 21,320 megalitres and a surface area of 150 hectares. Wimbleball supplies Exeter and parts of East Devon by releasing water into the River Exe (via the River Haddeo). This water is subsequently abstracted at Tiverton and Exeter. 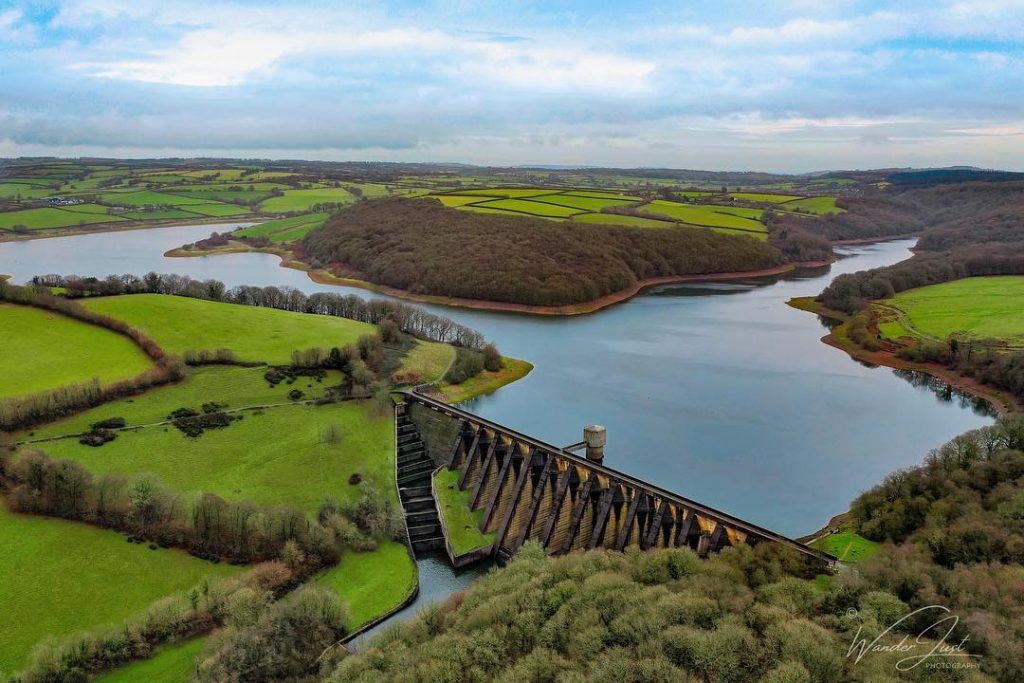 The picture above shows the outfall from the reservoir into Haddeo River. What the fact file fails to mention is that on its route to Tiverton the river runs past the bottom of Karen’s garden. And that Bury Water (an actual company with its accounts filed at Companies House) extracts water from the river, stores it up on the hill, cleans it and supplies it to the houses down below. I was going to go up and check out the treatment plant but by the time I had that smart idea the glorious weather had broken and three days of incessant rain meant I bowed to the greater good (Suhith) and abandoned the idea as we headed back to the city early. 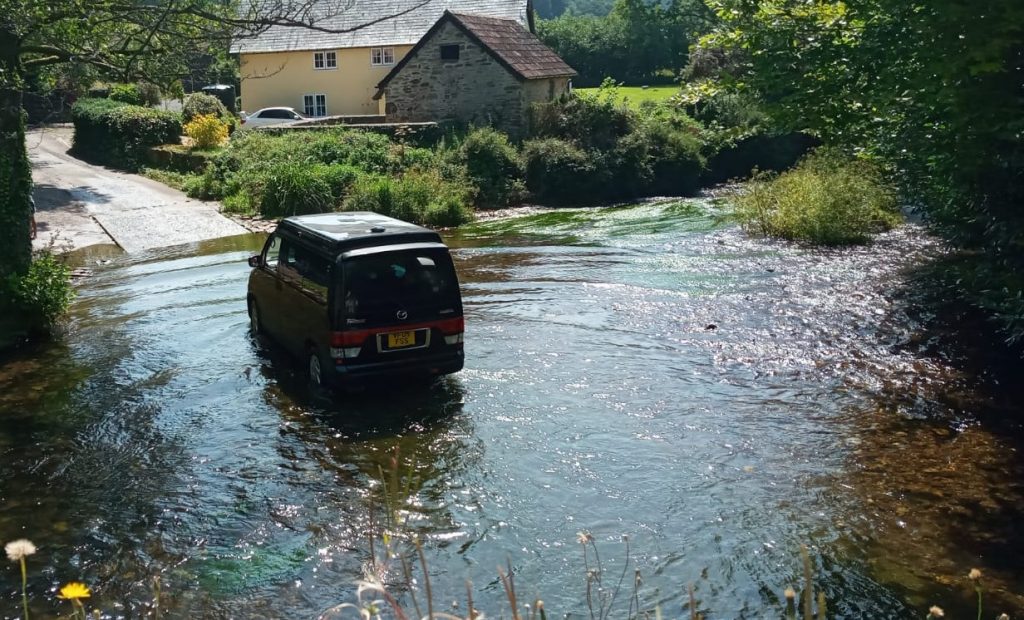 Fording the river Haddeo to get to our shower – how intrepid!

Which means this shower blog is about graphs instead. But who doesn’t like a good graph?? Especially a shower meets lockdown graph… 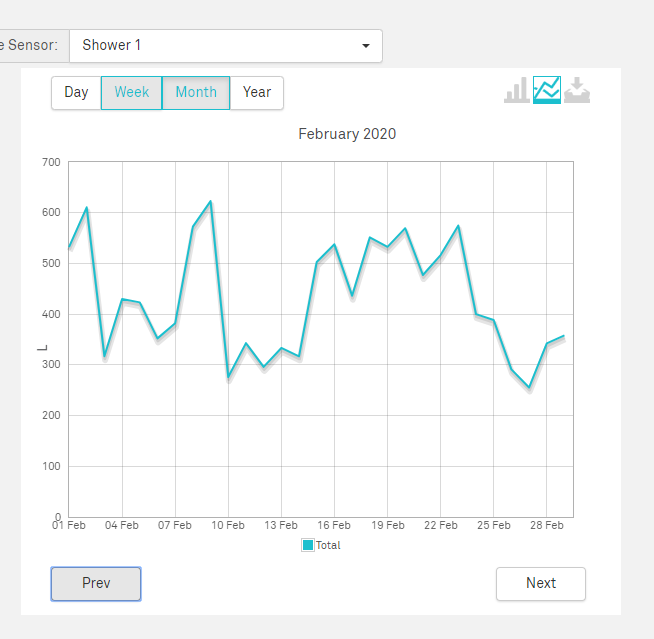 Due to having signed the Official Secrets Act I can’t tell you where this shower is. But I can tell you it is a poolside shower, one of a bank of ten, the flow rate is 8.2 litres/min, and that logging has shown that the average use time is 1.65 minutes. Meaning the average shower uses 13.5 litres of water. More water is used at weekends as you would expect and the February graph also clearly shows a heightened use of the pool during half term week, (week beginning Monday 17th) when footfall was nearly as high as at weekends. During half term 3,652 litres of water was used in that single shower. On a non-half term week the amount ranged from 2,605 litres to 3,099 showing (and backed up by the graph) that the footfall was spread more evenly throughout the week, with a corresponding decrease in visitors at the weekend. 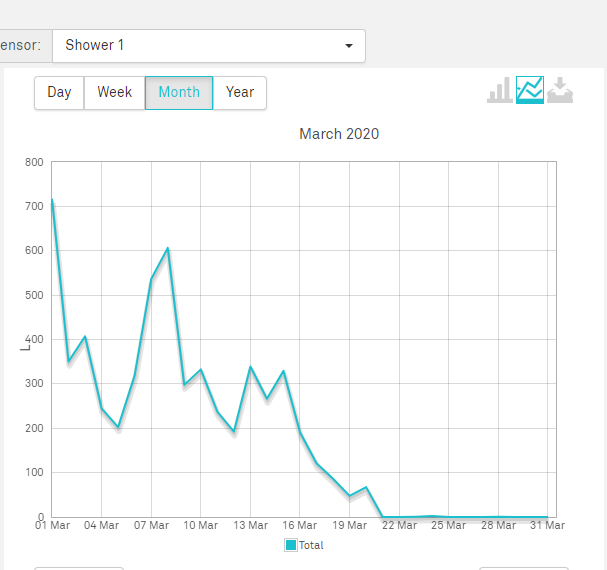 Now to the run up to lockdown. On the 1st of March, a Sunday, the centre was fully open and 700 litres of water was used in that single shower. There was the usual drop-off during the week – down to 200 litres on the slowest day, a Thursday – before going back up the following weekend. On the weekend of 14th/15th March there was no official lockdown but usage had dropped to below 50% of the normal high and usage continued to plummet even though the pool was still open. It must have been great being a swimmer that week, in your own personal Olympic sized swimming pool!

Friday 20th was the last day the pool was open, even though lockdown officially started on Monday 23rd March. And that flat line continued through April, May, June and July.

Then I found this bar chart from Reddit. I’m intrigued by the differential between men who shower seven times a week (40.5%) v women (19.3%). This sentence has been redacted.  So has this one!  (Basically was setting forth some potential reasons, which fell foul of the famalam thought police!. Which now means the next sentence makes naff all sense…)  But I cannot fathom the seven times a week discrepancy. Just how it should be. Some research that raises more questions than it answers! 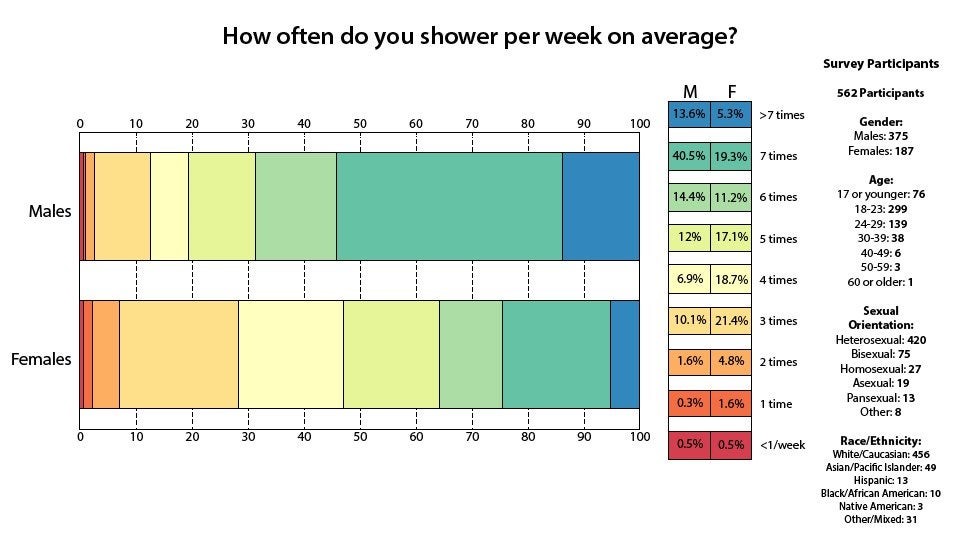 And then I found this fab graph re how often people wash their hair when they are in the shower done by country. 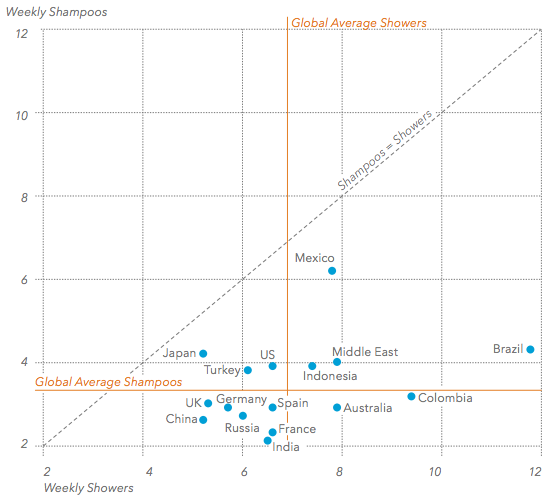 Brazilians have the most showers. Mexicans wash their hair virtually every time they shower. I have more showers than the average Brit (7 vs 5), but wash my hair less (once a week vs three times). Globally average shower use is bang on once every day. As I said at the start. I do love a good graph!