Despite living in one of the wettest part of Wales, water and its conservation is of great importance.  For example, this is written in the middle of May and for the last 6 weeks we have had no significant rain fall.  Because the land is free draining and is on the side of a hill, when we do get heavy rain the water runs off very quickly, but there are several springs that run all year.   The well is holding up at the moment, but there is no rain forecast so it is likely that we will be on the borehole in a couple of weeks. (As indeed they were from June 1st though for domestic use only, saving the well for plants and animals. Ed) 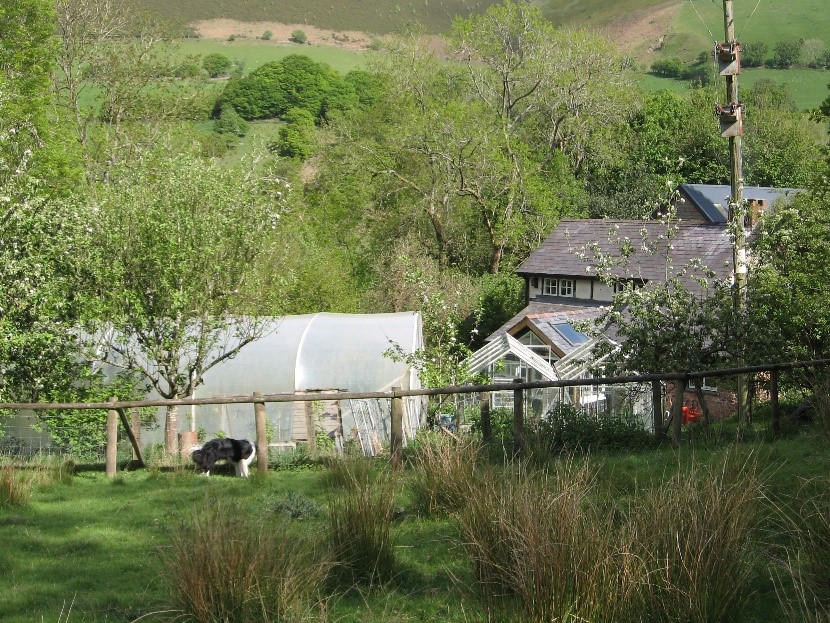 This is a view of the holding, with our home in the middle.  The holding dates from about 1600 and is halfway up a hill stretching at the lowest about 500 feet above sea level to around 800 feet. The top of the hill is about 1200 feet above sea level. We have 12 acres here which is divided into 4 fields, 3 of which have several natural springs. The lowest field also has a stream flowing through it so water for stock is not a problem but one field has no natural water supply so this has a water trough which is gravity fed from the top tank, of which more later. Currently our stock is 12 Pedigree Shetland ewes and 15 lambs (which will go in the autumn), which is about an ideal stocking rate here.

We moved here in 1989, but it was in Maia’s family (Chris’s partner. Ed) since 1973. The house has been dated to at least the mid to early 17c and is half timbered oak.  At one time it was a very prosperous farm but during the 1950s the holding was split up and the house remained empty until we renovated it in 1990. I found the remains of a hand pump outside what was the kitchen – a 50 mm diameter pipe driven into the ground. I have no idea how deep this pipe went, but given that there is a small stream very close to the house, that flows well when there is high rainfall but completely dries up in the spring or dry weather, I assume that the hand pump was used in the summer and the stream was used in the winter.

Water usage is for two households (three people), as well as horticultural and animal requirements.  For our water supply we use springs and a borehole. This year to date the supply from the springs is good and there is no shortage but if the dry weather continues there may be a problem later in the year. The spring has never been known to dry up even in the famous drought of 76, but the supply can become limited.

The main source of water used on the holding is from 2 springs further up the hill. They are outside our land but we have a wayleave – a legal agreement with a landowner allowing abstraction of water from a spring not owned by the abstractor – for the water which we feed into a large concrete holding tank, 1 metre in diameter buried 3 metres below ground. The average content is about 2000 litres, but now (mid-May) it is 1000 litres approx. 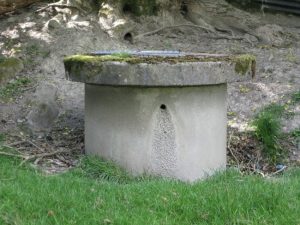 The normal water level in the tank is at ground level though during the winter it may overflow (as you can see in the picture on the left). In the summer it can drop to a metre, or even more, below the normal level.

This top tank is about 10 metres above the house and polytunnel so it delivers about 1 bar of water pressure. In order to get a decent pressure into both properties we feed this into a lower tank, (where the water level is controlled by a simple ball valve) and pump it to the houses from there. This tank is a plastic, bunded water tank which holds 2,500 litres. In addition, the top tank feeds an outside tap and a water trough in the field where there is no natural water supply. The outside tap feeds the irrigation system in the polytunnel. 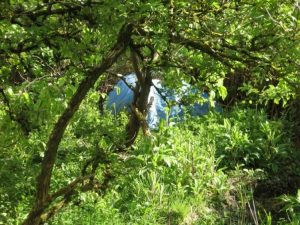 The bottom tank is under a tarpaulin to keep the tank frost free; it is a temporary measure that seems to have become a bit more permanent!  The tank is normally full but halfway down is a float switch which means that if the top tank fails, or there is a problem, then a borehole pump comes in automatically to keep the tank topped up, switching off when the tank is 75% full and switching on at 25%.  This tank is connected to the house via a mains pressure, variable output Grundfos JQ pump which is controlled by pressure control, giving mains pressure water to the houses.

The borehole is drilled 180 feet into the ground and is lined with a 100 mm diameter pipe which is slotted at the bottom 20 feet. The borehole cost about £2,000 and was drilled in 1990.  The top 6 metres is a steel pipe 150 mm in diameter to prevent ground water seeping in, then there is a 100mm diameter plastic pipe the full depth of the hole.  There is a stainless steel submersible pump at the bottom which feeds into the bottom tank.  When they drilled it, they hit water at about 20 feet.  They used compressed air passing through the drill which ejected the spoil from drilling with a fountain of water some 20 feet in the air. The water from the bore hole is older than the water from the springs (being deeper) and the taste is totally different.  Water from the springs tastes delicious, is almost a food source really and hugely enjoyed by all that taste it.  The water from the borehole despite being older coming from deeper in the ground has a slightly metallic taste and is not as enjoyable.

The water here naturally is acid (PH of 4.2) and would destroy copper pipe work. In addition, there is a high level of manganese, which although not hazardous to health, will stain both sanitaryware and clothing.  To counteract the acidity the water is treated with magnesium limestone chippings which are contained in a large cylinder that the water is pumped through. Delivered water is neutral at 6.4. 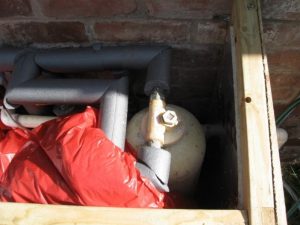 This cylinder requires occasional back flushing to remove sediment and the limestone dissolves slowly and requires replacement about once a month with more chippings being added via the hexagonal plug that can be seen at the top. Usually all that is required is about 500 grams each time. Interestingly if you increase the PH to 6 then the manganese drops out which is one of the reasons for back washing the system.  Backwashing is discharged to a drain. To remove some of the sediment from the incoming water, there is a particle filter fitted in line.  The water has been tested and is free from biological hazards, though E.coli is a problem for some people with a private water supply and is normally solved by a UV filter.

The system here feeds both holdings and we have found it to be quite adequate for the required use.  Obviously because the domestic water is pumped which entails electrical input as well as being treated, the water it supplies is limited to domestic use, with as much as possible other uses are gravity fed from the top tank.

I would estimate that in a normal year we rely on the borehole for domestic water for about 2 months of a year if it is a dry one. Last winter I improved the supply from the natural springs so I am optimistic that the borehole will be used less though time will tell.  The borehole needs to be run at least twice a year to prevent it from seizing. I do this by turning off the gravity feed to the bottom tank for a few days. 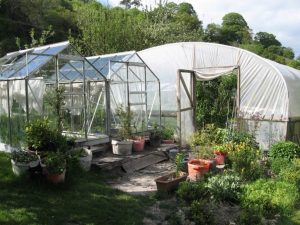 We have two green houses and a 48 by 16-foot poly tunnel.  The area we live in has late frosts and winter comes early.

The green houses and polytunnel are irrigated by seep hoses.  There is just enough pressure (1 bar) from the top tank which is either operated by a timer or manually. The seep hoses are zoned so a watering regime can be managed according to the crop requirements.

The picture on the left below and the one in the middle show the inside of the poly tunnel – note the small pond towards the back of the first picture and also behind Maia (Chris’s partner and chief horticulturist, Ed) , full of tadpoles at this time of year, which helps to keep the temperature more even as well as increase the humidity in the tunnel.  This means that the polytunnel has a population of newts, toads and frogs which is an excellent method of slug control. (Cool! Ed) 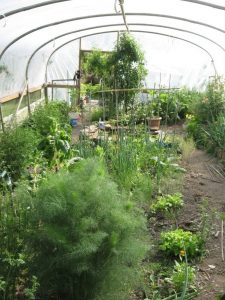 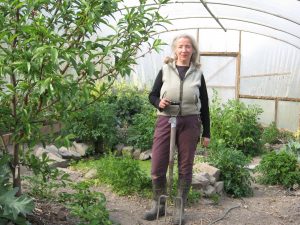 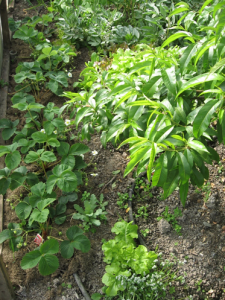 We also have an outside vegetable patch for all those that can tolerate being outside such as brassicas, roots, leeks, onions, peas and beans. All veg is grown in rotation and choice of variety is mainly due to hardiness and resilience to pests, (mainly slugs, which means that very often direct sown crops suffer) Watering is important for crop establishment. Every year has different requirements. We operate on a no dig system and mulch with home-made compost and grass clippings to keep the moisture in as much as possible. We use comfrey and nettle teas (smelly water) as nutrient feeds. We usually use rainwater from our down pipes for this. In very dry summers I often resort to using greywater for watering nonedible plants.

I do not meter our water usage, but I would say we are very economic with it. Certainly, from a domestic point of view we do not use a lot.

We have three ponds now on the holding. The one in the polytunnel (which I have already explained), a large wildlife pond, and a small pond near the house.

The wildlife pond is visited regularly by herons and wild duck. It is fed by springs below the pond surface, which became apparent when we were excavating it. The water level is constant summer and winter. 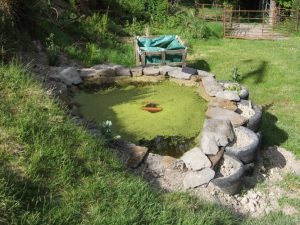 And now we have a recently created small pond, already home to newts, tadpoles and loved by our honey bees that come to collect water.  Only a month old it is amazing how quickly life takes hold. There is a small solar powered fountain that helps to keep the water oxygenated. This pond will require topping up with a hose pipe occasionally in dry weather as does the pond in the poly tunnel.