The Water Technology List (WTL) http://www.watertechnologylist.co.uk/ is part of the Enhanced Capital Allowance (ECA) scheme. It was set up by Defra in 2003. Its core aims are to: encourage businesses to invest in more sustainable technologies by providing fiscal incentive to users – for every £1000 spent the company pays £280 less tax; as a marketing tool for manufacturers; and to encourage innovation. It can only be claimed by businesses so schools and Local Authorities cannot take advantage of it and it is only eligible in a retrofit situation.

There are a series of criteria a product must reach to be eligible for the scheme. The two most relevant ones for this report are that the product must have a positive water conservation or quality outcome that is lasting and measurable and market penetration must be relatively low (less than 30% usually). There is a wide range of water efficient kit that is covered by the scheme – leak detection equipment, meters, rainwater harvesting, greywater heat recovery, industrial cleaning equipment, flow controllers and washing machines amongst the expected WCs, taps, etc. Every year Defra decides which products to review. This year it was taps, toilets, urinals and showers.

The AECB was invited to attend the Technology Working Group (held in mid-June) because of the AECB Water Standards and our work in driving the creation of a fittings approach to show compliance with Part G2 of the Building Regulations. The aim of the Working Group was to define a list of key areas for consideration to address and to draft recommendations for amendments to the criteria.

The other members of the working group were manufacturers, testing organisations, those involved with regulation (WRAS), the BMA (Bathroom Manufacturers Association) and Thames Water. A lot of the discussions and arguments centred on the minutiae as to how the testing standard was written and whether this BS number was current or whether it had been superseded by another, whereas I concentrated on making the environmental case. As you can imagine in a five hour meeting with so many political points to make (and that was without anyone mentioning what effect a Brexit would have on any of it – think at the time everyone was of the misplaced opinion/hope that it wouldn’t happen), you would lose the will to live if I covered everything. So I will just highlight the most important pluses and minuses on the environmental front.

And, as an aside, at one point there was a question as to whether the panel thought that the WTL is driving water efficient showers. The general feeling from the manufacturers around the table was that it doesn’t drive sales at all! Though it is still important to be on the list. Basically because the treasury does not provide any breakdown of sales, not even water related v energy related yet alone how many of toilets (for example) were claimed back following purchase.

Maximum flush volumes to stay at 4.5 litres whether dual flush of single flush. There was a discussion that if the WTL really wanted to drive innovation it should lower the levels of flush volumes to those that the Propelair currently attains (1.5 litres). However, as 6/4 litre flush WCs will still be the go-to solution in many commercial premises, it was agreed not to change this.

In standard BS testing WCs are only tested to 1.5 bar, which seems nuts given the proven increase of flushing volumes through fast refill. I lost the argument to have that raised to 3 bar for the purposes of getting onto the WTL. But the compromise (a good one as it happens) was that only WC cisterns with delayed action ballvalves will be allowed on the WTL. Saves 0.5 litres/flush which doesn’t sound much until you add up all the WC flushes across the UK every year. If it trickled down into the Regs it would have a massive effect.

Emboldened by that success I tried to push through a ruling that any dual flush toilet had to have a flushing mechanism that was clear to the user which was half flush and which full flush, but failed miserably on that front. The BMA’s position seems to be to protect the crescent on top of toilets at all costs.

Next up, retrofit flushing valves. The most widely available valves are required to be set by the plumber on site using a measuring gauge that is completely counter intuitive. (See below) The valve is marked from 1-18. The smart money would be that every line must be half a litre given that there are lots of 9 litre single flush WCs around. But the smart money would be so wrong!  Four on this dial equates to a flush of 6 litres. As you move up the dial the flush volume becomes less! I was told that the manufacturers do realise it is an issue and are looking for ways that it could be marked better. I suggested until that time they shouldn’t be on the WTL list but this didn’t go down well. So, watch this space… Or…. expect nothing to change. 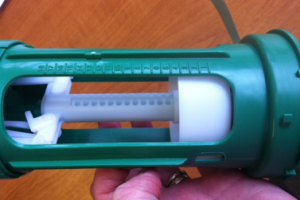 We spent a lot of time on toilets. By the time we got to urinals energy levels had started to flag and lunch was calling. But I was still alert enough to note that filling a urinal using a petcock means you got onto the WTL list. Since this is a basic requirement under the Water Regs its hardly innovative or driving water efficiency! It was unanimously agreed it should be removed.

Added to the WTL in 2005. Now needs to have a maximum flow rate of 8 litres/minute to get on the list. When being tested they are tested to 5 bar if no maximum bar specified. But what is the point of a shower with a flow rate of 8 litres/minute at 2 bar, but then if put on at a higher pressure it’s a greater flow rate than that. This set off a long discussion with a final agreement that the wording needed tightening up. Eventually this was settled on as something akin to: to be on the WTL a shower must state the minimum pressure required for the shower head to work and it must have the same flow rate (i.e. 8 litres or less) at 5 bar as at that minimum pressure. (Different pressures if designed for a low pressure system)

Percussion type showers have to stay open for a maximum of two minutes to be eligible for the WTL. But why not limit to one minute and not be adjustable on site by the user? That way the WTL drives the purchase of presence controlled showers that are set to run for two minutes but switch off as soon as the user moves away.  Committee agreed on this.

Have to be 4 litres/minute maximum flow rate to be on the list. Discussion about raising to 6 litres /minute in line with the Water Label. I pointed out that the Water Label is for all taps so includes sink taps and the WTL is for basins only so should stay at 4 litres/minute and make clear it is for wash hand basins only. I also asked that electronic taps should fail in the off position. Most do but doesn’t say they have to, to get on the list. Latter point was agreed. Former point, not sure.

(An interesting aside: there used to be 52 different versions of spray taps on the list. Now down to two. Follows the rise and fall of the now discredited version 1 of the water calculator ….)

Comments from the working group will be sent to Defra and will form the questions that are included in the industry consultation paper which is planned to begin in July (don’t hold your breath though).

So was it useful that the panel was held? Was it useful that the AECB was there? Well, yes it was but with the proviso that there is a long process between the WTL working group and any changes made. And plenty of time left for behind the scenes lobbying. Hopefully the points raised will be taken on board. Though how much interest Defra will have at the moment for anything other than how to handle bloody Brexit, we shall see.