No not getting damp when Lyds, Ols or Jon are staying, leaving wet towels everywhere and spending too long in the shower. As if they would!

A preamble. Dan has just got a temperature and humidity probe. Ever since he’s had it we have been bombarded with daily (sometimes hourly) readings; the humidity levels in our office have ranged from 44.9 to 72.3% and temperature has ranged from 21 to 25 degrees C. But once the novelty had worn off and we started ignoring him, he got a bit deflated.  And then I realised I could use his fascination with his new toy to get some relevant information for a blog. Namely, temperature and humidity readings before he got in the shower and after. If you are thinking ‘no way would he want to do that’ then it’s only because you don’t know Dan. He was thrilled. With the fact it will be a shower blog merely the icing on the cake.

The starting temperature in Dan’s bathroom (volume 12.8m3) was 20.8 degrees C and the relative humidity was 65.5%. His shower flow rate is 12.5 litres/second, the temperature of his shower was 39 degrees C and he was in there for 7.47 minutes, with the fan running all the time. By the time he’d finished showering the temperature had risen to 22.4 degrees C and the relative humidity had risen to 89.7%. Using a handy online calculator I worked out this was 18 grammes of water in every m3 of air in his bathroom, a grand total of 230ml of water which is enough for a decent cup of tea. As the calculator requires you to enter the air pressure I thought it would be interesting to see how much water would be in the air if Dan was showering on the top of Everest where the atmospheric pressureis about a third of sea level pressure (at 337 mbar or 250mmHg).  Sadly it made no difference, otherwi 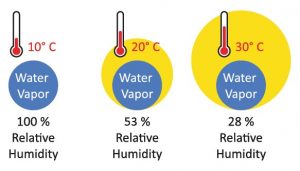 se we would have had a cast iron reason to send him up there to have one.

Back to Dan’s 7.47 minutes shower, which at 12.5 litres/minute is 93.4 litres of water. “I don’t hang about in the shower” he exclaimed proudly, which caused me to raise one incredulous eyebrow, followed closely by the presentation of a shower timer and the mention of the four minute challenge. I then took the probe home and got the following info about relative humidity levels in our bathroom. My starting temperature was 19.6 degrees C and the humidity was 67.3% though Suhith had already showered which was bad planning on my part. After my shower (about 90 seconds) it was 20.1 degrees C and the humidity was 68.3%. So after two showers still colder and drier than Dan’s starting point. An advert for leaky Victorian buildings if ever there was one.

So what does all this prove? Well, not a lot, but it kept Dan out of trouble for a bit and that is the main thing.

PS. Too much relative humidity combined with cold surfaces and you are going to get condensation and mould growth (which I have blogged about before) for those who would like to chill out with another episode of the best showering blog in the world.