Looking for a new family home in London in 1999 we took advice and found a suburban ‘semi’ that would lend itself to one or two modifications enabling more sustainable use of resources. Within 18 months of moving in, the insulation had been improved and we were the proud users of a solar panel and a rainwater harvesting system.  The solar panel took care of pretty much all our hot water needs from March and October.  The rainwater system provided a proportion of the water needed for flushing the toilet, supplying the washing machine and feeding an outside tap depending upon how much rainfall there had been. 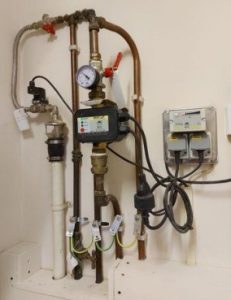 The solar panel, on the south-facing part of the house roof, is invisible from the front of the house.   The pipework and other elements of the rainwater system are barely more visible. Downpipes collecting rain running into the gutters around the roof are located on the side of the house, so are only easy to spot from there.  The 3000 litre rainwater collecting tank is buried in the front garden and the only signs of its whereabouts are the manhole cover at the top, surrounded by plant pots, and the small black lid close by covering the vortex filter which removes particles from the inflowing rainwater. Inside the house, the pipework and monitoring panels are tucked away near the gas boiler and the washing machine in a storage/utility space.  Every time I go in there it makes me smile to see the lights lit up, indicating the level of water in the tank, and the lights and pressure gauge showing the state of the pump.

If pushed in the early days, we might have admitted to being a bit worried about maintaining the rainwater harvesting system – would it be easy to find a reliable expert to solve any problems that might arise?  In retrospect we needn’t have worried. In 20 years, we have done nothing to the system apart from once having to replace the electric pump in the tank and once having a phone tutorial on how to adjust the water level-sensing wires. We’ve never even cleaned out the gutters.  [Readers may feel free to ‘tut’ at this admission.]

However, a completely unexpected problem arose recently. Over the course of months when the rainwater tank was full, water flushing the toilets changed colour. From normally being clear and visibly indistinguishable from mains tap water it gradually took on a brownish tinge and eventually came to smell of ‘drains’. 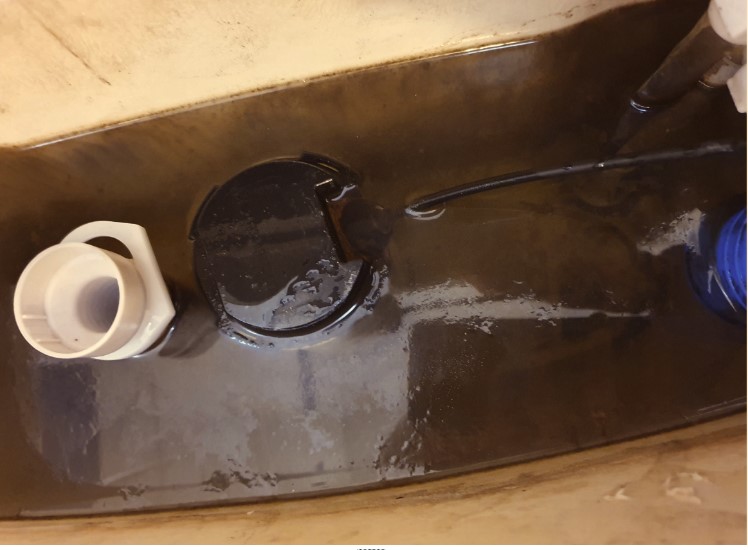 When there was a bad smell lingering in the house and clothes coming out of the washing machine smelt worse – so much worse (!) – than when they went in, we realized something was up.

Running through possible causes we soon had to admit we were stumped.  We phoned Cath who generously talked it through then put us in touch with a firm of expert rainwater engineers [thank you for the advice and contact, Cath] who quickly identified the problem.  The nearby sewage pipe, into which the rainwater tank overflows, was blocked, causing sewage to flow back into the rainwater tank. 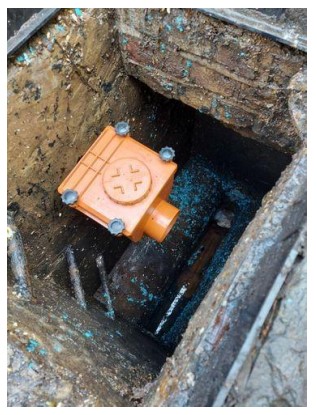 That was the bad news.  The good news was that the problem was easily solved. After Thames Water had unblocked the sewer (the work of about 15 minutes from arrival to departure) the rainwater engineers returned to clean out the tank and fit a new non-return valve at the end of the tank’s overflow pipe.

They added slow-dissolving chlorine tablets into the tank and the toilet cisterns so that, after a few toilet flushes and two or three runs of the empty washing machine, everything was clean, clear and sweet-smelling again. 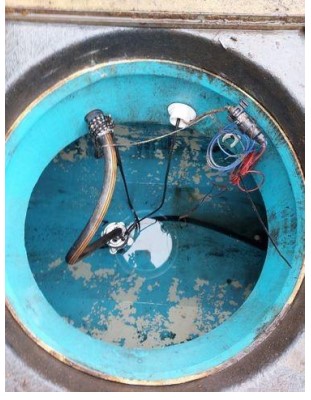 Right. Looking down into the rainwater storage tank after chlorine tablets added

From now on we’ll step up our approach to maintenance: every six months when we clean out the vortex filter (not that it needs much cleaning) we’ll also lift the sewer manhole cover to look for any signs of a blockage building up; in addition, we now have a contract for the rainwater engineers to give the whole system a maintenance check every two years.

With that, we’re looking forward to the next 20 years with our amazing system!