Oh well, sooner than expected dangerous showers part 2 pops up on the radar. At the end of last month’s blog I signed off with: And Legionella? In my opinion its dangers are vastly overplayed (cue ironic death in later years from exactly this if all the lead and asbestos I ingested on site doesn’t get me first). 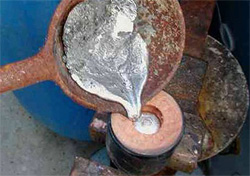 I have inhaled lots of lead vapour during my time as a plumber as well as lots of asbestos fibres. Occupational hazard really. But they are occupational hazards as different as chalk and cheese. Whether welding a lead upstandor melting lead in a cauldron, and marvelling at the dazzling array of metallic greens, blues, pinks and yellows that formed, any lead vapour inhalation was worth its weight in gold. Asbestos, on the other hand, has no redeeming features to it. It was just something to get rid off – usually without the now mandatory full breathing apparatus and space suit.

And Legionella? A few facts first. Legionella bacteria are commonly found in water. The bacteria multiply where temperatures are between 20-45°C and nutrients are available. The bacteria are dormant below 20°C and do not survive above 60°C. Legionnaires’ disease is a potentially fatal type of pneumonia, contracted by inhaling airborne water droplets containing viable Legionella bacteria. Such droplets can be created, for example, by: hot and cold water outlets; atomisers; wet air conditioning plant; and whirlpool or hydrotherapy baths. Anyone can develop Legionnaires’ disease, but the elderly, smokers, alcoholics and those with cancer, diabetes or chronic respiratory or kidney disease are at more risk.

So, you can drink as much Legionella as you want and you will be fine. It’s only if you inhale it that you run any risk. It’s also only problematic if you inhale a lot of it, so inhaling water droplets formed from cold water isn’t dangerous because there won’t be enough of the bacteria to harm you. The nutrients in water systems that the bacteria thrive on are sludge (found in old cold water storage cisterns -the ‘tank in the loft’ for non plumbers) or scale (mostly in hot water pipes or cylinders). Legionnaire’s disease has only been recognised since 1976 and the original sources were badly maintained air conditioning towers. Normal practice is to heat hot water in a cylinder to a design temperature of 60 or 65°C, which means that any bacteria formed are then destroyed. However, the practice in hospitals to heat stored hot water to 50°C to eliminate the risk of scalding, lead to perfect conditions for Legionella to proliferate.

So, as a smoker, should I have a bath instead of a shower? Well, first I need a really old cold water storage cistern with no lid and full of sludge, or an old galvanized steel storage cistern full of crud. Then, a hot water cylinder with lots of limescale in it, which, for some random reason, I have heated to 45°C rather than the normal 60°C. That’s such a perfect storm of events. As only two people have ever positively died from Legionella caught while taking a shower, and we have a combi boiler (so no chance for Legionella to form) I won’t be changing my bathing habits anytime soon.

And my light emitting shower? Well, after losing the will to live in the ‘live chat world’ of missing web shipments, I now know it has been shipped from Hong Kong and will take at least 5 weeks to get here! (That’s what comes of boycotting Amazon until they pay their UK taxes.)