Back in December for my blog on how long it actually takes to get clean in the shower I was chasing a few friends who are academics for dystopian sci-fi 1960’s pictures of people in showers. I should have just gone straight for the decontamination showers folder! 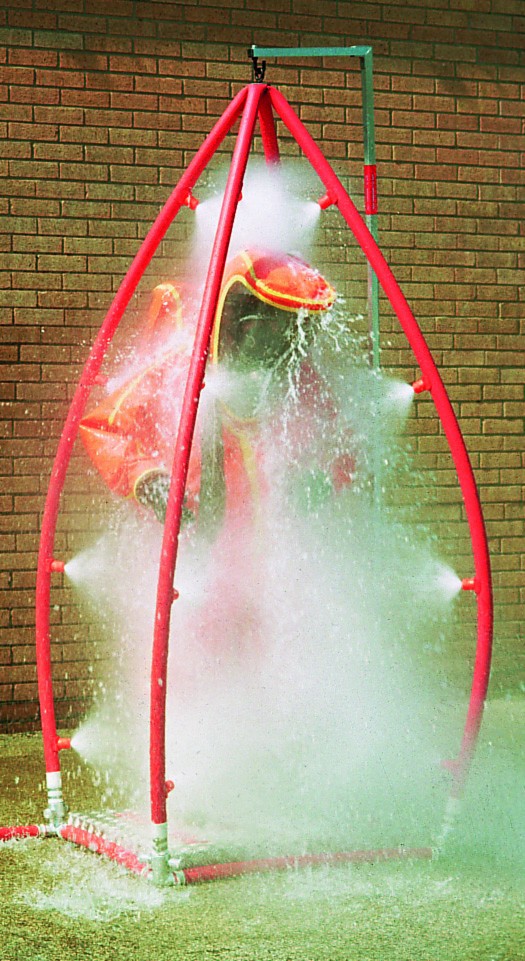 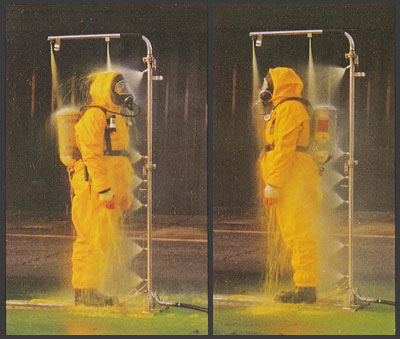 Decontamination/emergency/safety showers are required where industrial chemicals are manufactured or used, and date from the late 1920s. Treatment strategies for chemical burns are varied, with a wide range of neutralising agents. But safety advice is that time should not be spent looking for agents when water is readily available, since emergency showers operating with water have proven to be effective emergency equipment for people whose clothing has caught fire or for the removal of hazardous substances from skin. The showers work in four basic ways:

The main criterion is a large amount of water that must be provided continuously for a minimum of fifteen minutes. As well as supplying the required flow rate the spray pattern must still enable the user to breathe normally and the velocity of the spray should be low enough that it does not cause injury to the user.  The water should be of potable quality and the temperature maintained between 15oC and 37oC. 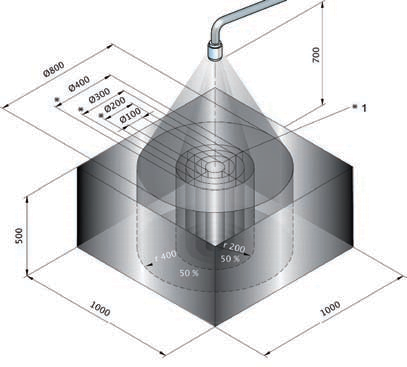 Research into the effectiveness of safety showers

Over the years there has been little research into the effectiveness of safety showers.

In 1983, DuPont de Nemours conducted a research program using six overhead emergency safety showers commonly employed in U.S. industry at that time. The investigation aimed at determining the impact of shower head design, water volume flow rate, and force of the spray on decontamination efficiency. The flow rate was varied between 76 and 151 litres/minute. In general, the time required for a certain wash-off percentage decreased at higher flow rates, but in some cases it actually increased – possibly explained by changes in the spray pattern. A standard sanitary shower head was also tested by DuPont at a flow rate of 23 and 38 litres/minute. Despite the low flow rates, this shower head provided a decontamination efficiency similar to emergency safety shower heads.

Research by Burby et al in 2005, recognised that the use of a body nozzle as well as an overhead nozzle provides the most effective way of decontaminating an individual who has come into contact with a hazardous substance. With such a set up decontamination was effected in five minutes in most cases (as opposed to the required fifteen minutes under the regulations).

Further research in 2014 in Germany to evaluate the effectiveness of different types of emergency safety showers. Fifteen customary shower heads were used at different flow rates yet a general relationship between water flow rate and decontamination effectiveness could not be established. At a low flow rate, the wash-off time in general did not exceed the time observed at considerably higher flow rates and the shortest decontamination time was found with a spray pattern that did not fulfil the current standards.

However, despite all these findings, the standards for flow rates and storage volume for a 15 minute supply remain.

Another use for safety showers? 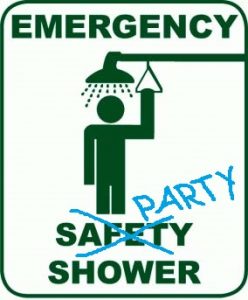 With a requirement of between 30 and over a 100 litres/minute (I found one emergency shower supplying a flow rate of 195 litres/minute) and a requirement to spend 15 minutes under the shower, that’s 450 to over 2,925 litres of water! Forget a stretch limo for the modern adolescent birthday party – there’s definitely a gap in the market for one of these and a pile of bubbles…