Having just walked Hadrian’s Wall and in the spirit of ‘What have the Romans ever done for us?’, I thought a short history of showering would be a good topic for this month’s blog. I would have liked to report on the flow rates encountered along the way, especially the shower that was so powerful, I had water sloshing around my ankles less than 30 seconds after standing under it. But, after packing for all eventualities on the weather front, I had no space in the rucksack for my trusty flow measuring jug, so cannot report whether it really was 20litres/minute or if the waste pipe was blocked with other guest’s hair… 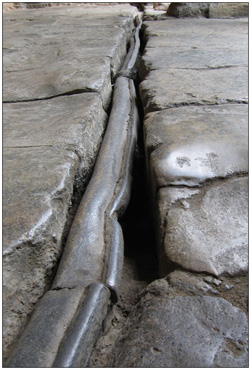 The first recorded bath (set in a room with piped water) dates from about 1760 B.C in Crete and it was the ancient Greeks who were the first people to have showers (as in piped water supplies coming out from fittings at head or shoulder height and draining away at the base). But it was the Romans who introduced them to the UK (or at least the parts they conquered). The Romans were in Britain from 55BC to 450AD, installed advanced water and sewage systems, provided communal bath houses with showers and believed in bathing multiple times a week. Their water supplies were carried in lead pipes and Plumbum is the Latin word for lead hence the modern term plumber – one of the coolest things about being one I always thought. After the fall of the Roman Empire, it was not until the 19th century that a system as complex or reliable as the Roman sewers and piped water supplies was rebuilt. 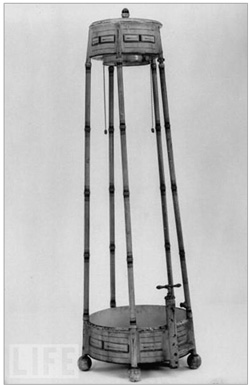 The first showers in the modern era were self-contained units where the water was reused several times (yuk), the Regency shower (pictured) being a rather superb example from about 1815. The reinvention of reliable indoor plumbing around 1850 meant free-standing showers could be connected to a running water source, making them easier to use. But bathrooms were still rare in most British homes, let alone showers. During the housing boom of the Victorian era, middle class homes began to be built with bathrooms, followed by bathrooms in working class houses in the Edwardian era and in the 1920s all new council houses were built with bathrooms. But even by the early 1960’s many homes in the UK did not have a bathroom.

Back to showering. In the early twentieth century it was still a largely non-domestic, collectively organized practice. The army, for instance, used ‘showering’ ( spraying the troops with powerful jets of water) as a means of washing as many bodies as possible within a short space of time and from 1915 onwards public baths with communal showers became common in the UK.

Once the bathroom became the norm in UK homes, then showers over the bath were available but I couldn’t find information about what percentage of homes had showers as well as baths. I expect not that many. Thermostatic mixing valves for showers became available in the UK from the 1950s, firstly for communal showers in schools, prisons, army bases etc and by the end of the 1950s one that worked with gravity fed showers. But gravity fed showers provide such a poor showering experience, its no wonder that showers were slower to take off in the UK than in the rest of Europe where they are fed directly from the mains. Electric wall mounted shower units became available in the UK during the early 1970s, and that market grew rapidly during the 1970s and 1980s, but flow rates from electric showers are limited to 6 litres/min max. The rise of the combination boiler from the mid 1980s resulted in a far better showering experience, and then came the power shower (though the less said about that the better).

85% of UK households now have some sort of shower and showering is more common than having a bath. But will the wheel turn full circle and communal showering such as the Roman’s practiced take off any time soon? Surely a question for a future blog…

June 2013 – A short history of showering