Lyds (my niece) was sitting at our kitchen table the other day and said how wonderfully soft, silky and shiny her hair was after two weeks at her mum’s (up in the Lake District), and how rough her hair felt ever since she moved to Sheffield over four years ago. And that, in a nutshell, neatly sums up the difference between showering in soft or hard water. 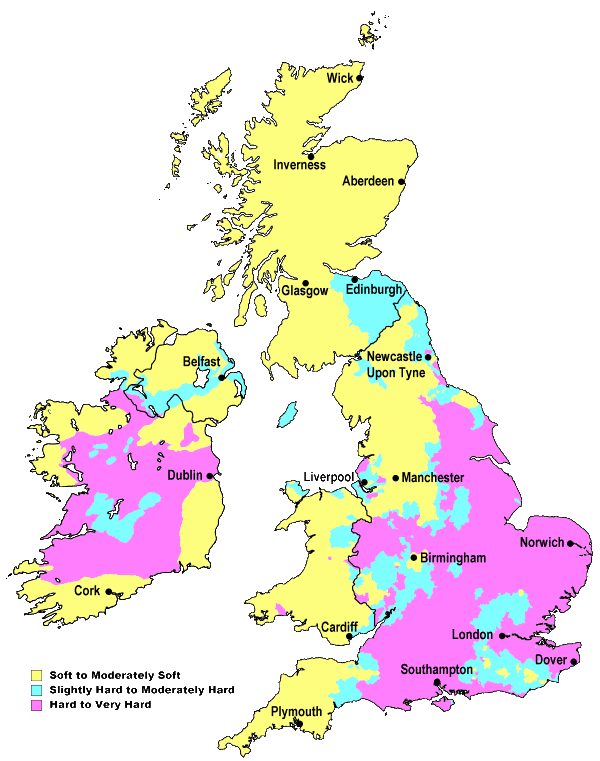 Showering in soft water is not something I get to do that often living in London. When I do go to soft water areas (Wales twice, Devon and the Lakes once each last year) I am always struck by two things. Firstly the inordinate amount of lather that the soap and shampoo produce and secondly how silky the water feels on my skin when I get out of the shower, almost as though the water had oils in it. I really like the latter feeling, although according to www.world lots of people find it “awesomely disgusting” and don’t feel clean after showering in soft water!

But it’s the extra lather from the shampoo that causes me a problem. I am so used to hard water I always over shampoo when I am in soft water areas, followed by using loads of water in a vain attempt to get the squeak test to work on my hair. I end up convinced I will be condemned to greasy hair until the next wash (how our learnt behaviour as kids permeates throughout our life!).

The hardness or softness of water refers to its mineral content. Hard water contains high quantities of dissolved minerals, such as magnesium and calcium which have been dissolved by rainwater (a mild carbonic acid) as it percolates through the rocks that it falls on. As water is supplied locally (there is no national water grid in the UK) the water supply in the UK reflects the underlying rock strata.

Whilst hard water is considered more palatable to drink because of the dissolved minerals within it (I certainly prefer hard water to soft water taste wise) it is problematic within plumbing systems, as when hard water is heated, the carbonates precipitate out, forming scale in hot water pipes, boiler heat exchangers and kettles, preventing efficient heat transfer. Even unheated hard water causes scale – it can be seen on the flushing rim in a WC, round the outlet of taps, and as a film on shower screens etc. No wonder if affects our hair and skin so much!

And I have another shower offer! This one has a bit more glamour attached to it as its in Sweden, and the water is heated by a boiler “that runs on waste products from the forest industry.” I assume Tim means a pellet boiler but I suppose it could be chip from a centralised system. I shall just have to go over there to find out.