So my last shower blog for a while (sad face emoji) but where better to end than where I started off all those years ago (85 blogs to be exact!)? And that is with Mu and Eric’s shower…

But a couple of other things first.

Number 1: a small nod to the teen who has her uses sometimes. Last week Sam told me about the existence of a song called Singing in the shower … apropos not of nothing but of me talking about the slide below. Which, you have to admit, is actually even more impressive than apropos of nothing. There followed several minutes of talking at cross purposes before it transpired that the person singing the afore mentioned song was/is Becky G. I was super excited about its existence and wish I could say I loved it. But, unfortunately, to my ears, it’s just a bit of fluff. And apparently the teen doesn’t think much of it either. Loads of ‘Oh my gods’ emanating from the left as Sam manages to drag herself away from her mob to interject after she realises that she is appearing in blog dispatches yet again.  Though before I had managed to complete that sentence, the phone had dragged her back into its all-encompassing grasp and her squeaks of protest had faded away.

Number 2: back to the slide which is the sneaky question we pose to 5 to 7 year olds at the end of their ‘The mysterious case of the sinking flamingo’ workshop. 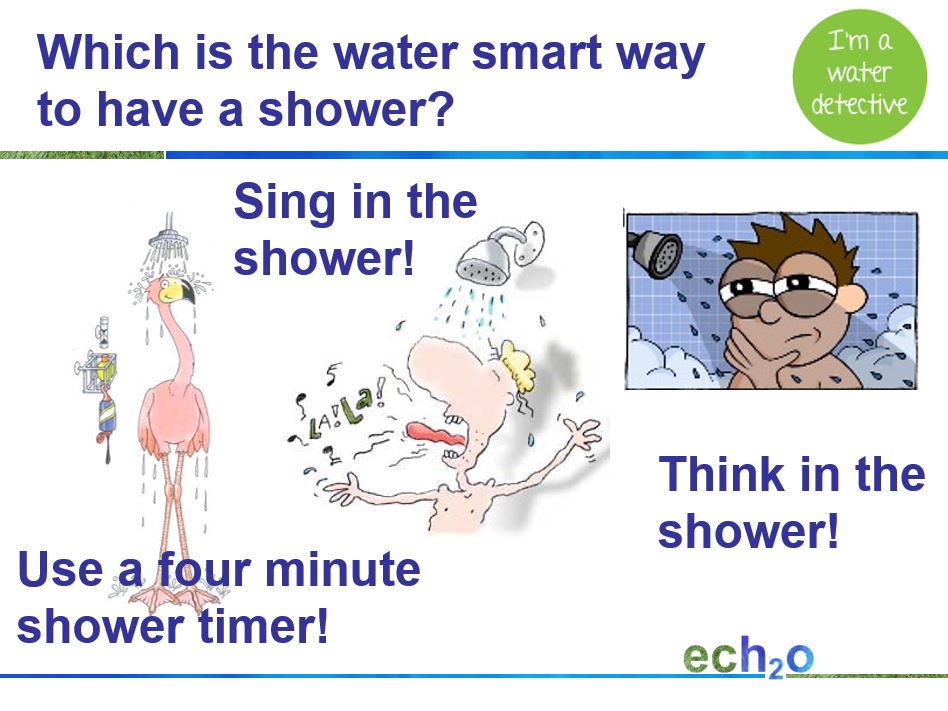 But anyway, back to the start.  For those who remember, (January 2012) Mu and Eric’s shower was so crap it used to come out as little more than a dribble even at the best of times. In fact, despite my assertion in schools that all showers in the UK have a flow rate of at least 5 litres/ minute I should be saying ‘all showers apart from the one at Mu and Eric’s’ which, if it ever reached the giddy heights of five litres a minute, would have caused heart attacks all round from the shock. Or, (Mu’s scenario) that the hot water would run out at any second due to the sudden increase in performance leading to any users being drenched with cold water and catching their death of cold. Since the shower never went above 3 litres/minute even on its best day it meant that we were all saved from an untimely demise.

Fast forward to 2016 when Mu and Eric downsized and moved into the centre of the village when everything shower related changed. Firstly, the pressure increased (from less than 1 bar at their previous home to a massive 3.5 bar). Moreover, the shower was now fed directly from a combi boiler instead of the previous CWSC balanced on a pile of bricks in the loft set-up. This resulted in a really satisfying shower in their new walk-in enclosure and still with the ability to set the temperature and the flow rate separately with a thermostatic mixture shower. But then Eric was having trouble working the controls and was showering less and less so the brains trust decided on a shower control that was simpler for him to use. And from there it all went downhill. Because, for reasons unknown Mu and Eric have ended up with a shower that is not thermostatically controlled at all. You can have a sensible flow rate if you are willing to have a cold shower but if you want a hot one (or even a warm one) you have to ramp the control all the way up until you are hit by piercing needles of water that are super uncomfortable and flood out of the large shower enclosure into the rest of the bathroom. The ability to get wet and then turn the shower off has been removed and now it’s just chilly trying to shower in it (if you aim for an even half sensible flow rate) even as it wastes a pile of water.

I know loads of you out there will be waiting with bated breath to find out the actual flow rate. But you will be sorely disappointed I’m afraid.  There is no way that the flow rate can be calculated without catching it in a bucket. And there is no way to get the bucket under the flow without being actually in the shower enclosure which means being in the shower. And since I had already got dressed before I had though it all through, the flow rate will remain a mystery. At least for the time being. Join me in 2020 when the shower blog resumes and maybe I will have worked it out.

Read what I wrote back in June 2016 about why the UK should remain in the EU. And, just to clarify, I still think we should stay in.