I received this PS to an email from Nick recently: “We are all waiting for the showering with a friend blog!” Well, sorry to disappoint my legion of fans out there but that wait will just have to continue. And when I do blog about it, it is likely to be far less exciting than some of you are imagining…

I had my first shower pod experience this month at the AECB conference up in Bradford. Great conference as always – this year enhanced by the water stream running throughout. (Note to self: possibly too many water puns for one sentence.) I also had my first shower in a shower bath/showering bath (the ‘fastest growing sector in the bath market’ no less) so thought they would be a good subject, if a little dry. 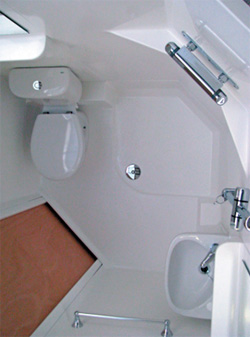 Well, it was small and I mean really small. The photo I took didn’t do the cramped interior justice, so I downloaded this one from the web. The pod in my room didn’t even have space for a towel rail but the juxtaposition of the toilet and the shower (as shown) is spot on. Meaning (quelle surprise) that the toilet got showered as well as me. Mine was also not upmarket enough to have a sliding shower head. I assume that a fixed shower head is marketed as a ‘maintenance plus’ as it prevents drunk occupiers from pulling it off the wall. The height of the shower head was perfect, if I was 6’ 5” tall (1.96m for those confused by the British measurement system). But at 5’ 5” (1.65m, ditto), by the time the water reached me the spray pattern had all but disappeared, and the temperature dropped by several degrees and even I was a bit underwhelmed by the whole ‘showering experience’1. Flow wise it was efficient though (at about 5 litres/minute – apologies for not being more precise) and as it was thermostatically controlled I could turn off while soaping up. 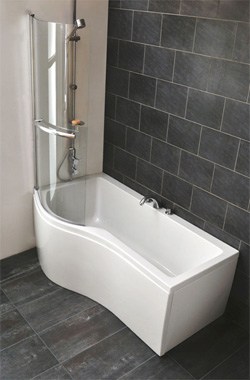 The following week I was up in the Lake District staying in a cottage with original plumbing fixtures in the bathroom. Massive cast iron bath, (no tap holes so pre globe taps), 13 litres flush volume in the WC and a washbasin hidden inside a wooden desk with ¼” brass bib taps. Add to this the lead welded waste pipes and I was in plumber’s heaven… though of course I couldn’t actually use the bath or the loo because they were so water guzzling. Luckily the owners of the cottage had covered all bases and downstairs was a 6/4 dual flush loo, and a Mira Sport electric shower (4.8 litres/min maximum flow rate) over the afore mentioned shower bath. I think as a place to shower the shower bath is an excellent innovation. Nice flat area to stand in and you can get nearer to the shower because you don’t have the sloping end of a standard bath to contend with. But as soon as it is used as a bath its failing becomes obvious. I have not had a bath since 2002 when I went up to Edinburgh to talk about rainwater harvesting at a conference and stayed at Chris’s flat (and probably hadn’t had one for ten years before that as well) and Suhith never has a bath. So in our house such a solution would be fine. But in research ech2o has recently carried out, 42% of people have both showers and baths every week. And my back of a fag packet calculation estimates that filling up the bulge at the end of the bath adds 10-15% to the volume of any bath you take in it.

1. I exaggerate obviously but only a bit…